Behold the manufacted nethicite...the fruit of our power and knowledge! See what the Stone of Man is capable of! Witness its power with your own eyes! Famfrit! To me!

Famfrit is a boss in Final Fantasy XII fought atop the Pharos alongside Dr. Cid. He is also fought in the Zodiac versions' Trial Mode at Stage 50 along with three Abaddons where he has the following items for steal: Hi-Ether (common), Elixir (uncommon) and Wyrmhero Blade (rare).

The hideous, darkly clouded form of Famfrit, scion in opposition to Holy Queen Emmerololth, scion of light, was anathema even to his creators. Thus, after a great battle, was he broken and sealed within armor laced with wards. The confines of his armor are void of light, and so is he called the Darkening Cloud. Men fear the rain that falls from the black clouds that ooze from that giant ewer as a herald of chaos and waste.

Famfrit is fought alongside with Dr. Cid, who is immune to everything when Famfrit is summoned. Famfrit mostly attacks with magick. His standard attack, Briny Cannonade, deals Water damage on one party member, and his special attack, Waterja (Aquaja in Zodiac versions), deals Water damage to characters in range and has a chance of inflicting Silence.

Dr. Cid will buff Famfrit from time to time. He can also use his S-85 Cyclotrone and Gatling Gun while the party is fighting Famfrit, although it is easily dodged by going behind him. After defeating Famfrit, Dr. Cid's paling will fall, and he can be easily beaten.

The first move should be to dispel Famfrit's buffs. Hopefully, Reddas is targeting Famfrit, and not Dr. Cid (his gambits can be changed in the Zodiac versions). Using Shell is useful. Famfrit's vulnerability to Oil can be abused with Fire-elemental weaponry, like the Gungnir, or a powerful gun with Wyrmfire Shot. Equipment with affinity to Fire can boost the damage further. One should also consider summoning the Esper Belias for an Esper vs. Esper battle, since Belias's Fire attacks can do massive damage against Famfrit. Viking Coat can be a good armor to wear for the battle as it makes the wearer immune to Water damage. 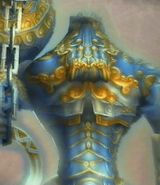 Cid calls Famfrit to battle with a piece of nethicite. 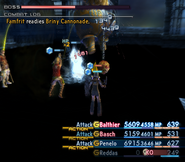