Famed Mimic Gogo is a boss in Final Fantasy V. He guards a Crystal shard in the sunken Walse Tower in the merged world.

Gogo tells the party he will mimic them, and if the player takes no action at all, he praises the party for mimicking him, and gives them the Crystal shard for the Mime job class.

If the player attacks Famed Mimic Gogo, he will be the most powerful boss. He will counter physical attacks with one of his own, dealing 9,999 damage, killing the target. If the player uses magic, Famed Mimic Gogo will counter with a spell that should kill the target. If the party gets Famed Mimic Gogo down to a certain amount of HP, he gets angry and will Triplecast Meteor, which should kill the party unless one is at an absurdly high level, is using cheats, or has muted him with Spellblade, as he is not immune to Silence. Should the party survive, they must battle Gogo directly as once angered, it is no longer possible to defeat him by taking no action.

In the Game Boy Advance version the battle is a bit bugged, showing random messages like "Ko'D!" or Odin: Okay That's enough!

The proper way to defeat Famed Mimic Gogo is to do nothing; he tells the party he will mimic them, and to defeat him, they must mimic him (i.e. do nothing).

It is possible to beat Gogo directly. His attacks before the Triplecast hit only one member, allowing the party to revive if the members are hasted. The HP-threshold to make Gogo cast Meteor is not high, so it is easy to buff a party member to do so much damage he dies before he can Triplecast. If the party does this, they still get the Crystal shard.

Another way is to use Silence or the Silence Spellblade to disable Gogo's ability to mimic. If the battle goes on long, the party can recast Silence.

There is also a way to make Gogo hurt himself, preventing him from getting mad and starting his triple Meteor. The party should first summon Carbuncle, then have a dualcasting Time Mage hurt him with elemental magic. Gogo will counter with two spells chosen from a stock of Flare, Holy and Meteor; Flare and Holy are reflected, hurting Gogo. The aim is to deal less than 14,000 damage and ensure all party members have Reflect on. To prevent Gogo from going berserk after the HP threshold, the party should start dualcasting two Floats on themselves. Gogo will counter the reflected Floats, hurting himself. This can be repeated until he has so little HP remaining he can be finished with a dual-wielding party member with Rapid Fire.

Gogo makes a cameo appearance as the icon for Time Attack in Arcade Mode.

Famed Mimic Gogo appears as a boss on all occasions when the Sunken Walse Tower is playable and is a playable character who could be initially recruited during the Challenge Event Scouring the Depths as a First Time Reward for completing the Crystals from Beyond stage on Classic difficulty.

According to his official Bestiary entry, Famed Mimic Gogo is weak against and immune to Water, despite all of Walse Tower, where he is encountered, being underwater. 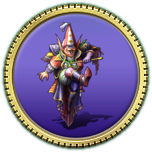