The Falls Basin (こおったたきつぼ, Kōtta Takitsubo?) is a location from Final Fantasy Mystic Quest. It is located south of the Ice Pyramid, and Benjamin and Phoebe must pass through here on their way to the Ice Pyramid. The area, unlike several before it, serves more as a puzzle than for combat, as few enemies reside there. Instead, the player must push blocks of ice around and jump over them to progress through the dungeon. At the base of the falls a Snow Crab attacks the party. Upon its defeat, Phoebe shows Benjamin how to use Jumbo Bombs so that he can blast his way through a wall of ice.

Once the Crystal of Water is restored, this area becomes inaccessible. Thus it is vital the player does not forget to take the Heal spell located here because, although it is the only treasure in the area, it is fairly difficult to miss. 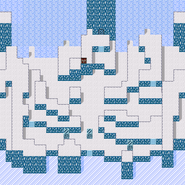