Falgabard, also known as Fargabaad, is an optional village of Dark Knights located to the southwest of Saronia in Final Fantasy III. It is meant to be accessible by the Invincible as a mountains must be crossed to get there, although it is possible to reach Falgabard prior to obtaining the Invincible by using a glitch to dive under Saronia with the Nautilus. However, the Nautilus must be carefully placed on a mountain to leave afterward.

The optional boss, Shinobi, can be fought in a cavern under the waterfall in the north of town. Upon defeat, he will give the party a Kiku-Ichimonji, the strongest katana that can be obtained in Falgabard.

The inn in Falgabard charges 640 gil.

This village is said to have been inhabited by an order of dark knights. While the fell blades of these knights lent them great power, they also cut short their lives. The order's numbers dwindled, until at last none remained.

Falgabard is mentioned as one of the wonders.

The Falgabirds are special units of the Red Wings. This force consists of Lich (a Zombie), Marilith (a Lamia), Kraken (an Ice Flan), and Tiamat (a Thundrake). They are fought in "Missions 80: Earth Sigil," "76: Fire Sigil," "78: Water Sigil," and "79: Wind Sigil," respectively, and are a direct reference to the Four Fiends. 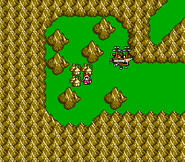 Falgabard on the world map (NES).

The Japanese dungeon for Falgabard Cave in Final Fantasy Record Keeper.
Add a photo to this gallery
Final Fantasy III setting
Retrieved from "https://finalfantasy.fandom.com/wiki/Falgabard_(Final_Fantasy_III)?oldid=3386655"
Community content is available under CC-BY-SA unless otherwise noted.