Fake is a neutral-elemental Eidolon from Final Fantasy Dimensions II. He can be obtained as a signet for Morrow to equip as the first-time completion reward for defeating the Chrono Dragon on the 44th floor of Babil Tower.

Fake's signet is one of Morrow's strongest neutral-elemental signets, providing Morrow with a massive boost in his attack stat, along with a decent boost with HP, magic, and speed stats. Fake's signet also teaches Morrow his strongest physical attack move, Chrono Blade, which deals massive physical damage to all enemies. The signet's passive to increase Morrow's physical attack power when equipped with a sword-type weapon by 20%, helps increase Morrow's damage output on physical attack abilities when using sword-type weapons, especially Chrono Blade, which can inflict 100,000 points worth of damage to all enemies.

Fake's signet artwork is based on his official artwork and in-game sprite. He also wields the Deathbringer sword. In his second artwork, he begins to be surrounded by crystals and enveloped in emerald-colored aura. In the final signet artwork, Fake's undershirt completely disappears, exposing his chest beneath his cloak. In addition, he sprouts wings from his Chrono Dragon form and becomes surrounded by a temporal void emerging from the background.

In the original free-to-play versions, Fake's signet could only be obtained during the "Chaos II" raid event. He taught the same abilities as in the premium version, but could only be upgraded from SP upgrade items dropped by the main raid bosses. Fake was an SSS ranked signet. 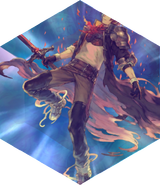 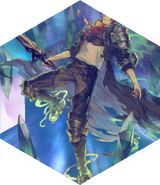 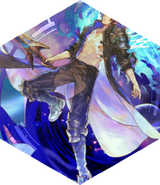 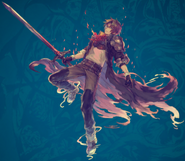 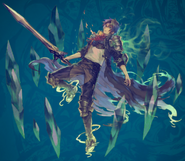 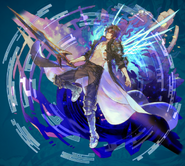