Cid Pollendina: Oh, shut up and help me remodel the Fake page!
Please expand this article into a full one. The following tasks need to be completed:This request can be discussed on the associated discussion page. Remove this notice upon completion.

Neutral
Fake is a non-playable character in Final Fantasy Dimensions II. He is a mysterious young man who resembles an older version Morrow. He is one of the central characters in the game's Eureka arc.
Spoiler warning: Plot and/or ending details follow. (Skip section)

As the Chrono Dragon, Fake appears as a massive floating white mechanical dragon.

His human form resembles an older version of Morrow, due to him needing a humanoid form to go unnoticed in the human realm. However, his hair is a darker shade of brown and has a more chiseled facial structure. While his outfit is similar to Morrow's, it has some drastically different elements, containing a shredded black overcoat and wearing pants. Due to his appearance being similar to Morrow, he was given the name Fake by Morrow and his group.

When Fake initially meets Morrow and his friends, he views them as his enemies getting in the way of saving Mist. When joining the party reluctantly after being defeated by Morrow in Navos Forest, he has an introverted personality, not saying anything unless being spoken to. However, as Morrow and the others learn of Odium's control over the other Prismatic Gods, Fake begins to work with Morrow and becomes their ally.

Fake has strong feelings to protect Mist from harm's way, trying to keep her with him at all times and even chooses to fight his former allies to keep her safe. Towards the ending of the game's Eureka arc, he and Mist begin to develop romantic feelings for each other.

Fake in the form of Chrono Dragon first appears during the finale of the Interlude chapters. Searching for Mist, Fake and his monster army attack the citizens in the Kingdom of Elfheim. The Deathlord and his undead minions are able to defeat the lesser monsters, however the Deathlord and the Chrono Dragon are transferred to an unknown spacetime soon after these events.

Morrow and his friends are able to find a way into the unknown spacetime and find the Deathlord on the brink of defeat from fighting Chrono Dragon. Morrow and the party decide to help the Deathlord challenge Chrono Dragon and defeat the creature. After fighting the creature, the Chrono Dragon casts Full-Cure on himself and fully recovers his wounds. Becoming appearant that none of their attacks are enough to defeat it, Morrow and his friends decide to escape while they have the chance.

When attempting to escape, Chrono Dragon sends a hoard of monsters to prevent Morrow and the party from escaping. The party defeats the monsters standing in their way, but before they can reach the exit, Chrono Dragon appears and attacks them. Morrow and the party fight Chrono Dragon once more and manage to do enough damage to the creature to allow them to escape. However, due to the party being unable to defeat the creature in the rift, it still is able to strike once more at anytime. Despite the events that have just unfold, Morrow and his party; with the newly joined Deathlord, remark that they are prepared to fight the creature when it appears once again.

However, the Chrono Dragon is able to follow the party onto the spacetime ship and begins attack it from the exterior of the ship. Despite Mist's prayers to quell the dragon, he still attacks the vessel, leaving the party no other choice but to fight the creature. The dragon then appears within the interior of the ship, leaving the party to confront it once more. However, it results in the party exhausting themselves once more and leaves the ship in danger of being destroyed. Mist in the hull of the ship with Sorgue, attempts to pray once more for it to calm the dragon's anger and manages to stun the Chrono Dragon. Parai and the Deathlord, seeing it as an opening, attack the creature at the same time causing him to be knocked out while Sorgue opens the hatch of the ship to expel it into the unknown spacetime.

Fake in his human form is fought once during the events of the third chapter of the Eureka arc in a one-on-one fight against Morrow. During this fight, he mimics all actions that Morrow will perform on him as counterattacks, with the only attack he uses being Chrono Rush. 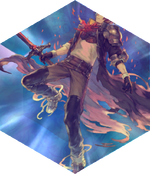 Fake featured in the artwork for Eureka, World of Primals.