This quality weapon is used to hound prey until the bitter end. Increases chain bonuses.

Failnaught (フェイルノート, Feirunooto?), also known as Fatal Barb, is a recurring bow in the series.

Failnaught is an archery weapon that provides 72 damage, 582 delay, Ranged Accuracy +10, Subtle Blow +5, and Enmity -5. It deals 7.42 damage per second and accumulates 148 TP per hit. It can be equipped by level 69 Warrior, Red Mage, Thief, Paladin, Dark Knight, Beastmaster, Ranger, Samurai, and Ninja.

It is dropped by Suu Xicu the Cantabile.

Fatal Barb is a bowsword for Serah that provides 54 Strength, 76 Magic, the ability Chain Bonus Lv. 4, and the synthesis ability Vampiric Strike (Synth). It can be bought for 5200 gil, Spined Horn x3, Superconductor x2 (Episode 5+).

Bards. It can be acquired in the Forbidden Land, Eureka Anemos by upgraded an Antiquated Failnaught, and then further upgraded into the Failnaught +1.

Failnaught has an attack and magic attack of 15 and can only be bought from the multiplayer shop in Invidia for 9,000 pts.

A bow made when a bard attached bowstrings to his beloved lyre, and set out to save his beloved from an evil tyrant. The songs from the lyre imbue all loosed arrows with the power to fell any who would stand in love's way. Upon returning from his triumph, the bard was knighted for his bravery.

Failnaught is a bow that provides 87 P.ATK, 95 Aim, and deals 50% more damage to undead. It can be found in the Vestment Cave. 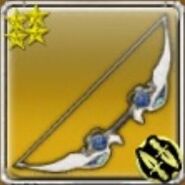 [view · edit · purge]In Arthurian legend, Failnaught is the bow of Tristan and it was said to never miss its mark.