Cid Pollendina: Oh, shut up and help me remodel the Fahrenheit page!
Please expand this article into a full one. The following tasks need to be completed:

Isaaru: I'm amazed this thing can fly, truly! It must be sacrilege to think so highly of a machina. I feel uneasy just riding it!
Tidus: Sure it's not motion sickness?
Isaaru: Motion sickness? What infirmity is that?
Isaaru and Tidus

The Fahrenheit, also known as the Continental Circus in the Final Fantasy Mechanical Arts depiction of the airship (action figure), is the airship available to the player in Final Fantasy X. Unlike in previous Final Fantasy installments, there is no world map overview, and the player cannot manually fly the ship around Spira. Instead, it is used for quickly transporting from one location to another.

The text "Wind bless you" is inscribed on the gold dial in Al Bhed script. The writing on the deck of the ship says "Salvage Dream CID". During the battle against Evrae that takes place on the airship's deck, Trigger Commands are available to move the airship away from the fiend.

When a rescued Tidus works with a group of Al Bhed salvagers led by Brother and Rikku, the Fahrenheit is recovered from the bottom of the ocean near Baaj Temple. It is properly unveiled later when the Al Bhed's Home is under attack from the Guado. The Al Bheds' leader, Cid, helps Yuna's guardians and other survivors escape, and destroys Home using the missiles installed on the ship.

As the guardians attempt to enter Bevelle to save Yuna from being forced to marry Seymour Guado, the ship is attacked by the guardian wyrm, Evrae. The ship is damaged in the following attack by the Bevelle guards and Cid steers it away.

After Yuna's party defeats Yunalesca in the ruins of Zanarkand Dome, they are picked up by Cid and make the Fahrenheit their base of operations. During the assault on Sin, it is revealed the Fahrenheit is equipped with powerful laser cannons on either side strong enough to blast off Sin's fins, but they break before they can fire on Sin's head. After the party has ventured inside Sin and defeated its core, Yu Yevon, the party returns on the ship to watch the beast die. Afterward, Cid keeps the airship and uses it to transport people to his new tourist attraction.

When the party visits Fahrenheit for the first time, they meet Dona who doubts her abilities as a summoner. Depending on Tidus's answer, Dona and Barthello will either quit the pilgrimage and remain at Djose Temple (picking the option "Sure! Sounds good to me"), or keep traveling and can be met again when returning to the Zanarkand Dome (picking the option "Who cares?"). If the player doesn't talk to her, Dona will appear in the Zanarkand Dome.

As well as having the option to choose a destination when speaking to Cid, the player can choose to input a password. The passwords can be deciphered from various Al Bhed texts found across Spira and, when entered, unlock new locations on the map for the player to explore. They will be highlighted in yellow until the player has visited them. Passwords must be spelled correctly and be in upper case to be accepted. Finding the Al Bhed text clues is not required for the passwords to be accepted.

Entering the password GODHAND will allow the player access to the Mushroom Rock Road Ravine, where, if they possess the Celestial Mirror, they can obtain Rikku's Celestial Weapon, the Godhand.

Entering the password VICTORIOUS allows access to an area in Besaid called Besaid Ruins 1 that holds the Victorious armor for Rikku.

Entering the password MURASAME will allow access to a second hidden area of Besaid, Besaid Ruins 2, that holds the Murasame katana for Auron.

. There are six areas to discover, and like the password-discovered locations, they will be highlighted in yellow until the player visits them.

Rin also appears near the ramp leading to the deck, after the scene of Evrae's appearance. His wares are the same. 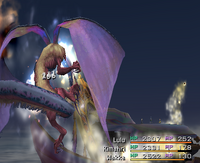 During battle, Cid appears on the turn list and supports the party in play by controlling the Fahrenheit. Tidus and Rikku have access to a Trigger Command that will prompt Cid to move the ship either closer to, or further away from Evrae or Sin on his next turn.

Against Evrae, Cid will use Guided Missiles when far away to deal massive damage, although this can only be performed three times. Once all three Guided Missiles attacks have been used, Cid's turn will be skipped should Tidus or Rikku not give him any commands.

The Fahrenheit appears in an Airship Field Music Sequence for the theme, "Launch".

The Fahrenheit is never called by its name in Final Fantasy X. This is alluded to in Dissidia 012 Final Fantasy by one of the Mognet letters, which states that not everyone knows the name of the ship.

Yusuke Naora, the art director of Final Fantasy X, stated in an interview that the color scheme of the Fahrenheit was inspired by the jerseys worn by the Los Angeles Lakers basketball team.[1] 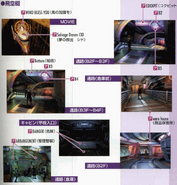 Bridge of the Fahrenheit in Final Fantasy X.

The party on the Fahrenheit in Final Fantasy X.

Yuna and Tidus on the deck in Final Fantasy X.

Fahrenheit outside the Zanarkand Dome in Final Fantasy X-2.

[view · edit · purge]Fahrenheit (symbol °F) is a temperature scale based on one proposed in 1724 by, and named after, the physicist Daniel Gabriel Fahrenheit (1686–1736).

The Fahrenheit may be a reference to the airship of the same name that appeared in the Squaresoft Super Famicom game Bahamut Lagoon.