Fafnir is a Rank VII Mark from Final Fantasy XII. Originally sealed by Gran Kiltias Anastasis, the monster was released and now roams the section of Silverflow's End accessible from Karydine Glacier, in Paramina Rift during snowstorms, and causes constant rainfall at Mt Bur-Omisace. The hunt becomes available after the storyline events in Giruvegan. Fafnir is considered the hardest regular mark.

The Kiltias Ieeha, who set up the mark for it, took his fellow Kiltias to fight Fafnir to keep it away from Mt Bur-Omisace. By the time the player party slays the monster, Ieeha is among those already dead at the monster's hands, with only his ring left behind. His death was not in vain, as Fafnir's defeat and Ieeha's sacrifice inspire a world-weary and cynical viera on the mountain, Relj, to aid the residents of Mt Bur-Omisace to begin anew and rebuild what they lost.

The Fafnir is also fought at Stage 89 of the Trial Mode in the Zodiac versions. The party fights it at the Gate of Fire in Giruvegan. In the Trial Mode, the Grand Helm can be rarely stolen from it and the Grand Armor rarely poached from it.

A fiendish Wyrm possessed of great Intellect, yet great Avarice withal, sparing no Evil in the Pursuit of its Desires. Once, seeking the Relics of the Dynast-King kept in the Stilshrine of Miriam, did it challenge the Gran Kiltias Anastasis Himself, but was defeated, being then secured in the Depths of Paramina Rift. Most unfortunately, with the Gran Kiltias' Passing, its Bonds failed and it attacked Mt Bur-Omisace. One of the Devout, seeking Aid, posted a Bill for this Mark.

Fafnir can be found at Silverflow's End during a snowstorm. Talking with Relj triggers the condition, but the weather changes if the party passes through the Frozen Brook. The player should head to the southwest (left, according to the map) from Mt Bur-Omisace and circle around Frozen Brook toward Silverflow's End (taking a chocobo is the most efficient).

Another way is to zone in and out of the Feywood until the Paramina Rift is engulfed in a blizzard, and then head straight for Silverflow's End.

Fafnir starts the battle with multiple beneficial statuses. In the beginning, Fafnir mainly has two attacks: a standard physical attack and Rake. It will also cast Silencega. Occasionally, if all of the party members are cured of Silence, Fafnir will recast it.

When Fafnir's health hits critical its attacks start to chain, and it will repeatedly use White Breath.

Fafnir is weak to Slow and Sap, as well as Thunder. Fafnir's attacks grow stronger as its HP falls.

The player should have mastered all Remedy Lores and have a supply of Remedies or Chronos Tears ready. Echo Herbs also come in handy. At the start of the battle the player should dispel Fafnir's buffs. Even with constant Bubble, it is recommended to cast Protect/Protectga from time to time.

Fafnir's Sleepga can be lethal if the party is already in a weakened state. If it seems that the party is losing, the player can hide behind the rocks to re-heal, buff, and reorganize the strategy. The damage from Fafnir's Shock can be mitigated by casting Shell/Shellga, though it is possible to avoid the attack by hiding behind the rocks when Fafnir readies.

When Fafnir is in critical health the player should ensure at least one party member is out of the attack range while it is using White Breath. Should any members get KO'd from Fafnir's White Breath, it is advised to revive them at a safe distance. Fafnir's attacks grow stronger as its HP falls, and a constant use of buffs is needed. Scourge or Bio can inflict Sap on Fafnir, and repeatedly using Shear and Expose lowers Fafnir's physical and magical defenses.

Quickenings and the most powerful Black Magicks, such as Thundaga (which it is weak against) and Scathe, work well. Especially in the Zodiac versions where the damage cap is removed, the player should equip a weapon that boosts the potency of Lightning attacks for the Thundaga caster: Storm Staff or Cloud Staff. The player might want to consider summoning the Esper Adrammelech, but he will need to be buffed, especially with Regen and Bubble. An archer with a good bow and Lightning Arrows is also powerful, especially if buffed with Bravery, Berserk and Haste.

Slowga might temporarily work on Fafnir. One trick to inflict both Slow and Sap is to equip the Nihopalaoa accessory and use a Remedy on the Fafnir; this works better than attempts to inflict either status by individual spells. If the player doesn't have Nihopalaoa, they can inflict the statuses with spells with ease with the Indigo Pendant.

A simple strategy is to equip Mirror Mails on all characters and stand behind the huge rock on the battlefield, forcing Fafnir to only cast Shock, Sleepga and Silencega, all of which will be reflected; Shock will deal at least 6,000 damage every time. The party can reflect Thundaga off the party to achieve multiple consecutive hits, but this forces the player to switch the healing gambits to X-Potion and to disable all other gambits the party might have to cast spells on themselves.

If an extra character is recruited to use as a meat shield, the party could just be equipped with Ruby Rings/Mirror Mails and hide behind the tank in one of the gaps beside the big rock. The party must have Arise, Regen, Curaja/X-Potions and Bubble at all times. The player should keep the pressure on Fafnir with strong physical attacks. As always, it is possible to retreat to one of the gaps beside the big rock and heal/swap/Charge party members whenever low on HP or MP.

It is also possible, albeit time-consuming, to stay out of Fafnir's range and only use long range weapons, such as guns and bows. This strategy can be combined with the above Reflect strategy.

The player will also receive a Ring of the Light after the battle to give to the petitioner upon completion of the mark.

Defeating Fafnir adds its sprite to the Sky Pirate's Den and awards the "Wyrmslayer" trophy/achievement in The Zodiac Age. 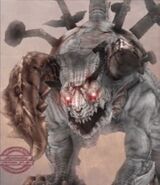 [view · edit · purge]In Norse mythology, Fáfnir (Old Norse and Icelandic) or Frænir was a son of the dwarf king Hreidmar and brother of Regin and Ótr. Fáfnir was a dwarf gifted with a powerful arm and fearless soul. He guarded his father's house of glittering gold and flashing gems. He was the strongest and most aggressive of the three brothers. Fáfnir eventually killed Hreidmar to get all the gold for himself. He became ill-natured and greedy, so he went out into the wilderness to keep his fortune, eventually turning into a serpent or dragon (symbol of greed) to guard his treasure.

Fafnir could also be an allusion to Vagrant Story, as the game already has numerous other allusions to it, it being another game by Yasumi Matsuno, the original director of Final Fantasy XII. In Vagrant Story Faufnir's Tear is an accessory bearing a crystal, Faufnir's Tear, said to have been wept from the dragon's eye when it died.