Fafnir (ファーブニル, Fābuniru?), also known as Mesosaur, is a recurring enemy in the series. It is often a very powerful dragon, boasting high stats, particularly in Strength and Defense, and usually attacks with Breath abilities.

Fafnir is an enemy fought at the southern continent in the World of Ruin. It often flees from battle, and is not a very threatening foe otherwise.

Fafnir is an enemy fought at the Monster Arena as a Species Conquest monster, unlocked after catching four of every Drake in the game. It attacks three times per turn via Triple Attack, attacks with powerful elemental breaths, and two powerful physical attacks. It drops useful armor that has elemental Eater abilities 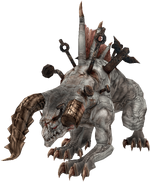 Fafnir is a Rank VIII Mark fought at Paramina Rift during snowstorms, and is available after the events of Giruvegan. It is among the hardest Marks in the games, and fights utilizing the Shock, Silencega, and Sleepga spells in addition to the deadly White Breath ability.

Fafnir appears as a Notorious Monster in Eureka. When he is defeated, he will drop Anemos Crystals, Anemos Lockboxes, and sometimes a minion. 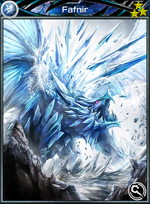 This gallery is incomplete and requires Pictlogica Final Fantasy [FFVI] added. You can help the Final Fantasy Wiki by uploading images.

[view · edit · purge]In Norse mythology, Fáfnir (Old Norse and Icelandic) or Frænir was a son of the dwarf king Hreidmar and brother of Regin and Ótr. Fáfnir was a dwarf gifted with a powerful arm and fearless soul. He guarded his father's house of glittering gold and flashing gems. He was the strongest and most aggressive of the three brothers. Fáfnir eventually killed Hreidmar to get all the gold for himself. He became ill-natured and greedy, so he went out into the wilderness to keep his fortune, eventually turning into a serpent or dragon (symbol of greed) to guard his treasure.