A gold ring adorned with a fairy that protects the wearer against both blind and poison. Fairies are known to sometimes play tricks on humans when the mood strikes them, but they are also known for their protection they offer to those humans whom they trusts. Legend has it that fairies would leave behind tokens for those people they had chosen to protect. This was used as the motif behind the fairy ring's design.

Faerie Ring (フェアリーリング, Fearī Ringu?), also called Fairy Ring and Faerie Bracer, is a recurring accessory in the series. It often prevents statuses such as Poison and Blind.

Ring imbued with a fairy's magic. Prevents poison and darkness.

The Fairy Ring is a relic that protects against Blind and Poison, and can bought in Narshe, Nikeah, South Figaro, and Thamasa for 1,500 gil.

Fairy Ring prevents Blind and Poison, and can be found in the Cave of the Gi or bought in Mideel for 7,000 gil.

Any of Yuna's rings can become the Faerie Ring if the dominant ability is any three status "Proof" abilities.

The Faerie Bracer is an armor for Auron, obtained if the dominant ability on any bracer are any three Status proof abilities.

Faerie Ring is a magic-raising artifact that increases Magic by 1. It is found in Tida Village during the first cycle. 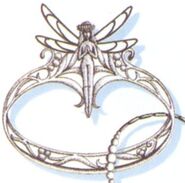