Claws imbued with the protection of fairies. These were the product of a small, child-like fairy who tried and failed to inject them with magic power capable of surprising their wielder, leading to a magic explosion which caused it to change shape. They are thought to have been based on the mythril claws, but now only the fairies know the truth. They have been imbued with a magic power and are capable of confusing anyone they're used on.

Faerie Claws (ようせいのつめ? or 妖精の爪, Yōsei no Tsume?), also known as Charm, Charm Claw, Elven, Fairy's Claw, Fairy Claws, is a recurring weapon in the series. It is generally a mid-ranked claw weapon that usually inflicts the Confuse status effect, in addition to slightly boosting other stats other than attack.

Faerie Claws is a high-ranked knuckle that provide 37 attack in the NES version and 89 attack in all other versions, as well as +2 Intellect and Mind. It can only be found in the Ancient Ruins and equipped by the Onion Knight, Monk, and Black Belt.

Faerie Claws (Tempting Claw in the Easy Type version) is a mid-ranked claw that provides +3 Agility, a 30% chance to inflict Confuse when attacking with it, and deals extra damage when attacking Giants. It does not provide any attack power much like every other claw, and can be used by Yang and Edge. It can be found in the Lodestone Cavern.

In the 3D versions, the Faerie Claws provide 5 Attack, 95 Accuracy, +3 Stamina, 30% chance of inflicting Confuse, and dealing extra damage against Giant-type enemies. It is still found in the Lodestone Cavern, but only Yang can equip it.

Faerie Claws provides 5 Attack, deals extra damage against Giants, and has a 30% chance of inflicting Confuse. It is one of Yang's initial weapons. It can be bought for 600 gil at Damcyan or Fabul. It can be equipped by Yang, Monk A, Monk B, and Edge.

Faerie Claws is a mid-ranked claw that provides Speed +3 and has a 30% chance of inflicting Confuse. It can be found in a chest in the Impact Crater and is usable by Yang, Edge, and Ursula.

Charm Claw is the mid-ranked claw that provides a base power of 37.5, an attack power of 45~150, +5 Magic, and can inflict Poison, Paralyze, Sleep, Confuse, and Blind. It is obtained from a chest in the Mine.

Fairy's Claw is a Fist weapon obtained by finding it in Snowy Woods. It provides 47 ATK and has a 30% chance of inflicting Confuse. 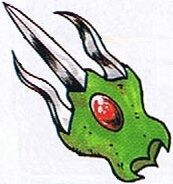 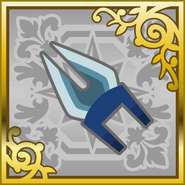 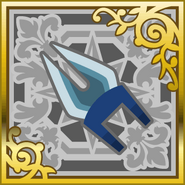