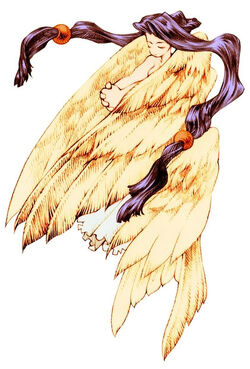 Quote when summoned in the PS version

Faerie (フェアリー, Fearī?), also known as Fairy, is a recurring summoned monster in the Final Fantasy series. It is associated with healing and protection.

During the Crystal War, a freelance pixie named Titania fought alongside her nine summoned Faeries to aid the Allied Forces of Altana. Although Faerie cannot be summoned by players, Titania's Faeries cast healing magic on both players and allied NPC soldiers during Campaign Battles, an allusion to Faerie's role as a healing summon in Final Fantasy Tactics.

Fairy was also the name of a Final Fantasy XI server, which was shut down on March 22nd, 2010.

Two faeries, Eos and Selene, appear as familiars for the Scholar job, and aid their summoners with their healing and defensive magic. Faeries served as the companions to the Scholars of Nym, before their civilization became afflicted with a horrible plague that turned them into tonberries, and their society fell apart.

Faerie is also the name of a server on the Aether data center.

An esper that restores HP.

The Faerie is covered in its wings, and releases feathers onto the battlefield healing allies within its range of effect. This summon is stronger than Moogle and has a larger area of effect.

The Faerie is based on a fairytale fairy, only with the wings of a bird instead of a dragonfly's or butterfly's. 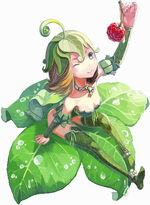 In the original free-to-play versions, both versions of Fairy could only be obtained through the summon drawing shop.

Artwork for Final Fantasy Tactics: The War of the Lions.

Render of a Scholar and Eos in Final Fantasy XIV.