Eyes on Me (ability)

Eyes on Me (アイズオンミー, Aizu On Mī?), also known as Eyes On Me, is a recurring ability in the Final Fantasy series. The ability is commonly used by the Ahriman enemies.

Deals dark damage to an enemy.
112 MP
Cast: 4.5 s
Recast: 29.25 s
Eyes On Me is a Blue Magic that deals Dark damage to an enemy. It costs 4 Blue Magic Points to set. When set, it grants MP+15 and HP -5 stats to the player. Eyes On Me can be paired with certain spells to create the Magic Attack Bonus job trait. It takes 4.5 seconds to cast and can be recast every 29.25 seconds.

Eyes On Me can be learned from most Ahriman enemies who use the ability. The easiest area to learn this spell would be in the default version of Castle Zvahl, due to area having a high number of Ahriman-type enemies.

Eyes on Me is an enemy ability used by the All-Seeing Eye in the Dzemael Darkhold. It is a circular area of effect and does not show the normal red AoE indicator. When used, the ability will deal heavy damage to all players near the enemy. In order to reduce the damage from the attack, players must stand in crystallized areas that exist in the dungeon to grant them the Crystal Veil status effect.

Morrow's Ahriman signet has Eyes on Me as its summon attack. It deals moderate wind-elemental damage to all enemies and lowers their speed for three turns. Performing the ability costs 2 bars from the Summon Gauge.

Eyes on Me is an enemy ability used by Ahriman during the "Shattered World" event. When used, the ability would deal damage to a single target from the opposing party. 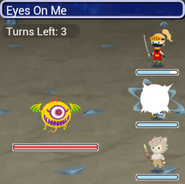 The ability is likely named after the song from Final Fantasy VIII.