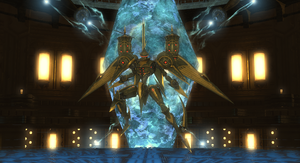 It was composed by Masayoshi Soken. Michael-Christopher Koji Fox both wrote the lyrics and sung the song.

"Exponential Entropy" is the boss theme of the Cruise Chaser, and plays when he is fought in

Alexander - The Heart of the Creator.

It is the 35th track in The Far Edge of Fate: Final Fantasy XIV Original Soundtrack.

It is a mechanical, repetitive theme, possibly meant to foreshadow the stable time loop in which Alexander and his summoners travel. The passage about "triangulation" and "predestination" could refer to how Alexander is triangulating the Warrior of Light by only communicating with them through Quickthinx Allthoughts, and how not even Alexander can change the future without bringing ruin to it—so in the end, the victory of the Warrior of Light was predestined.

The final two stanzas of "Exponential Entropy" are borrowed from the leitmotif of Alexander, "Locus".

The third stanza of "Exponential Entropy" was used in a trailer for Soul Surrender, when revealing gear and Aquariums.

The official lyrics were released on The Far Edge of Fate: Final Fantasy XIV Original Soundtrack.

"Exponential Entropy" was performed by the Primals in a live concert.

An arrangement of "Exponential Entropy" appears in the Primals' debut album.

A band arrangement of "Exponential Entropy" is performed by the Primals which appears in this album.

[view · edit · purge]In thermodynamics, entropy is a quantity that represents the ability of a system to use its internal energy to do work, and because it is related to the number of possible microstates of the system, it is popularly used as a measure of "chaos" or "disorder". The Second Law of Thermodynamics guarantees that the total entropy of the Universe is always increasing, unlike most other physical quantities, which are conserved. As such, entropy is closely associated with time.

[view · edit · purge]In psychology, triangulation is a technique used to manipulate an individual by only speaking to him or her through another individual.