They say a horrible creature that lost a war with the gods lurks even now in the Mosphoran Highwaste. 'Tis a local legend.

Exodus is an optional boss in Final Fantasy XII that unlocks the Esper Exodus on the License Board. The party fights him at the highest point of the Mosphoran Highwaste. He is also fought in the Zodiac versions' Trial Mode at Stage 68 along with two Golems. The item command is disabled in both battles. In the Trial Mode, the following items can be stolen from Exodus: Elixir (common), Rod of Faith (uncommon) and Golden Skullcap (rare).

Most ancient of the scions, created in opposition to Halmarut, the Arbiter, and scion of light. Tasked with keeping watch over the world, with the authority to judge the value of all things. As he watched, unseen, unknown, his attachment to the world dwindled, and faded until it was as nothing. Fitting that he would desire to make the world, too, as nothing. Yet he fell in the war against the gods, and was thwarted, imprisoned in punishment for his heresy.

Seal Item - prevents use of items in the battle.

Seal Item - prevents use of items in the battle.

The earliest point the battle can be fought is after reaching Phon Coast during the main storyline, though the player might be under-leveled at this point. The party will need some Gysahl Greens that can be bought at the Clan Provisioner at the Rabanastre bazaar after reaching the rank Hedge Knight in Clan Centurio, from Dyce next to the Gate Crystal in Balfonheim Port, dropped by fighting wild chocobos, or bought from the skyferry route between Rabanastre and Nalbina Fortress.

The Item command is disabled during the battle. Exodus is a slow opponent that attacks mainly with magick, but its physical attacks can inflict Stop.

When Exodus goes HP Critical, his Defense and Attack will increase, halving the party's damage (or more if they do not have good enough weapons) and his Speed will increase from abysmal to sluggish. At 15% HP remaining, Exodus erects a physical paling and will get the Reflect status. His speed increases a tiny bit as he will continually use Scathe and Flare.

With all the best weapons and armor up to the Phon Coast, this battle can be won by attrition as soon as the player gets the Craftsmoogles' League to the Mosphoran Highwaste. The characters should be equipped with a good ranged weapon. Ammunition that inflicts Slow is useful. The recommended gambits are one person to have first priority Haste on any ally, and another with the basic Curaga at 40% HP remaining, and Cura at 50% HP remaining. The party can equip Bubble Belts and set those values to 60% for Curaga and 70% for Cura. Items will be disabled during the battle, so the party can't rely on X-Potions.

Right before going in, the party should buff. Unless Archades has already been visited and the party is above level 40, or has Crystal Shields, everyone should use a ranged weapon. This spreads them out and protects from multiple casualties from Scathe. It's best to keep Exodus focused on one character at a time so that he does not hit the entire party with 3000–4000 HP of damage with one casting of Scathe.

After Exodus erects a physical paling the party has to dispel his Reflect and get in one shot from Bio to do damage. Hopefully it will cause Sap, for as soon as the spell is cast he automatically gets Reflect and the party will have to dispel him again. Exodus's speed increases a slightly as he continually uses Scathe and Flare, and the player must defeat him as soon as the paling falls. It is possible to equip an Opal Ring to ignore Exodus's Reflect.

The player can exploit Exodus's fixation to the status Reflect—if he loses his Reflect, he will immediately try putting up a new one—by setting a gambit to Foe Status=Reflect: Dispel, and it will buy some valuable seconds while he uses Reflect again, and also grants a chance of setting a well-timed Slow on him, which will buy even more time.

If one character's gambit is set to Foe-Status=Reflect: Dispel, and immediately after that character begins casting Dispel, another one start casting Slow, then Slow should hit after the Dispel activated, and also before Exodus has time to put up another Reflect, and then the third character can shoot him with a gun. On subsequent turns the character who used Slow can also shoot or raise fallen partners.

A way to defeat this boss, possibly even at level 1, is to equip powerful guns on two characters, and cast Haste, Bravery, and Berserk on them, then use the Infuse technick to lower their HP to 10, and take them out of the party. The third party member should cast buffs like Shell, Haste, and Bubble, then be equipped with the Dawn Shard. Using this single character, the player should walk into the zone with Exodus and steal.

Right before they approach Exodus, the player should put the two berserked characters back into the party. After the steal, the non-berserked character should go behind Exodus, causing Exodus to only cast magick. By this time Exodus's HP will have been worn down considerably, and a Gil Toss of 9,999 along with gunshots will finish the job. Exodus likely will not have time to put up his paling.

The easiest strategy is to have three characters with ranged weapons. Before entering the area where Exodus is fought, the player should summon an Esper. When the battle is entered with an Esper on the field, Exodus is frozen and cannot move. With the characters buffed with Haste, they can stand back and shoot him from afar. Exodus will still cast the occasional Flare or Scathe or attack if the party gets too close. Because of Scathe the party should be spread apart. 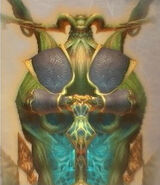 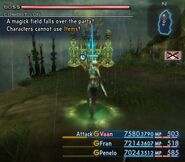 Exodus denies the use of items. 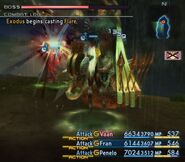 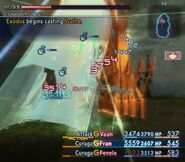 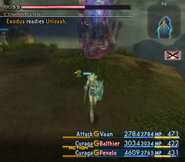