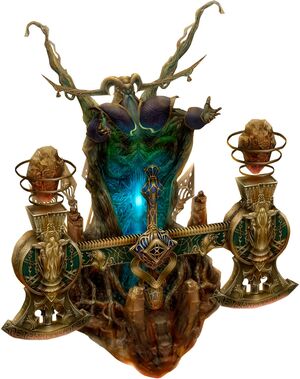 (Exodus the Judge-Sal, 審判の霊樹エクスデス?, lit. Shinpan no Reiju Ekusudesu) is an Esper from the world of Ivalice. The Esper of Aether, he represents the Zodiac sign of Libra, the Scale, and as such Exodus stands upon a platform with a scale. His color sign is orange due to being non-elemental. He is also referred to as the Tula Ascendant, which is the Sanskrit name of its Zodiac sign as used in Jyotish (Hindu) astrology.

Exodus is an alternate translation of Exdeath, and his title relates to Exdeath's origin as a tree. Exodus's body resembles Exdeath's knight form, albeit with a different head. In addition to this, his goal to reduce the world to a state of nothingness is identical to that of Neo Exdeath.

Exodus is found on the highest peak of the Mosphoran Highwaste, in the Empyrean Seat. The player must activate the shrines in a correct order to be able to reach it.

Meteor: A non-elemental attack, and Exodus's ultimate attack. Exodus stands on a crystalline pinnacle and, charging two small meteorites, he launches them into the atmosphere. A giant meteor plunges through the clouds and detonates above its target. Its damage is random.

Exodus takes half damage from all elements.

Exodus can cast Curaja and Ardor, and has gained Null Vitality and Piercing Magick augments.

Judge-Sal who metes out justice from the heavens.

Exodus returns, along with the other Espers, in Final Fantasy XII: Revenant Wings. He is the Rank III Flying Earth Yarhi. He is fought in Mission 68: Destiny in the Stars, in Gugoza Falls. The party goes there to view recent sightings of shooting stars, which reveal themselves to be none other than Exodus. When the Judge-Sal is defeated, Fran gains her Quickening, Gaze of the Void.

Exodus is a totema of the viera race, and is obtained by fighting him in the dimensional rift. When summoned, Exodus is less damaging to viera. His attacks do damage to MP instead of HP.

Exodus appears as a Scion. He can be called by anyone equipping the Gift of the Judge-Sal when the Smash Gauge is orange. His attack is Meteor, which does 999 damage to a single target.

Exodus is Latin for "Going out", from ancient Greek ex- (out) hodos (way). Exodus is also a name for a book in the Bible.

Retrieved from "https://finalfantasy.fandom.com/wiki/Exodus?oldid=1460141"
Community content is available under CC-BY-SA unless otherwise noted.