Cid Pollendina: Oh, shut up and help me remodel the Exdeath/Theatrhythm page!
Please expand this article into a full one. The following tasks need to be completed:

Exdeath's origin reaches 500 years back into the past, when a single tree within the Great Forest of Moore became host to the souls of countless evildoers. Imprisoned for years, he will use the Void's power to seize revenge.

Exdeath appears as a boss-type enemy in Battle Music Sequences for Final Fantasy V and the Dissidia series.

Exdeath is a boss-type enemy, and makes his playable debut as the antagonist representing Final Fantasy V. Added via update on September 13th, 2017, he is obtained by collecting Dark Crystal Shards.

His Limit, Power of the Void, deals damage to boss-type enemies in direct proportion to Magic. 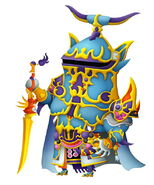 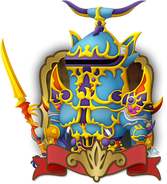