Exdeath's Soul is an enemy in Final Fantasy V. It is similar to the battle with Exdeath at the end of World 2.

This is one of the strongest enemies, as Exdeath's Soul can use powerful spells like Death and Banish along with the Reaper's Sword ability. Each of these attacks can kill a character in one hit. It is possible to run from this fight.

It is impossible to see the enemy's HP, neither with Libra nor in the bestiary.

For completion reasons the player can defeat this enemy with a Necromancer after defeating Enuo, to gain the Dark Arts magic, Dark Flare.

One strategy is to have a party member with the Red Mage's Dualcast ability and level 6 White Magic repeatedly dualcasting Holy. Another is to have a party member learn the Ranger's skill, Rapid Fire, and the Mystic Knight's ability, Spellblade: they should enchant their blade with Holy, and then repeatedly use Rapid Fire. Otherwise, it would be wise to use the Holy Lance and the Excalibur.

Each strategy can be strengthened further by having Mimes mimic what the party member is doing.

During the battle with Exdeath's Soul the theme from the Sealed Castle plays, rather than the usual battle theme. 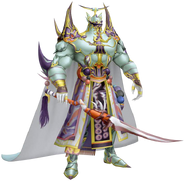 Exdeath's Dark Mage C outfit in Dissidia Final Fantasy (2015), based on Exdeath's Soul's sprite.
Add a photo to this gallery

Retrieved from "https://finalfantasy.fandom.com/wiki/Exdeath%27s_Soul?oldid=3238859"
Community content is available under CC-BY-SA unless otherwise noted.