Time for your viscera to see the light of day! Now die!

Exdeath, also known as X-Death, ExDeath, Exodus, or Exodes in Final Fantasy: Legend of the Crystals, is the main antagonist of Final Fantasy V. According to Ghido, despite his knightly appearance, Exdeath was once, and still is to an extent, a tree from the Great Forest of Moore.

Exdeath is about seven feet tall and wears a sky blue suit of armor with a horned helmet, spiked shoulders and a long blue cloak. His helmet is topped with a two-ended plume and has a thin opening that would normally be used for sight. His armor is decorated with jewels, gold linings and beads, and though he is a warlock, Exdeath carries a sword he can use in battle as proficiently as his magic. The only part of his body not covered by the armor are his hands, which are ash gray with black pointy nails. His appearance under the suit of armor is revealed in Dissidia 012 Final Fantasy by purchasing the second alternate costume for Exdeath.

In his tree form, Exdeath's torso and head are visible, but are a darker shade of blue. Below the torso he shows his true form as a tree, the bark forming a demonic face on the tree's side. Neo Exdeath is a gray-skinned demon with red horns and muscular limbs and the various demons that composed his previous form manifesting from the waist down.

Simple-minded fools such as yourselves could never hope to understand my motives.

Exdeath, mocking the Warriors of Light

Exdeath is a selfish, maniacal, loud-mouthed, and blasphemous being of pure evil. He treats Bartz Klauser and his party as mere pests in the way of his goal, and swats them away without killing them, seeing no reason to dispose of such a mild threat. He may seem cocky, but his power is practically unmatched.

Exdeath shows no empathy for the slaughter of his minions, even thinning out his own lines as punishment for their failings. He is incapable of understanding positive human emotions, such as love, evidenced when Exdeath fights Galuf. Exdeath is sure Galuf can't beat him because "all the hatred in the world could never defeat [Exdeath]". However, Galuf surprises Exdeath at nearly overcoming him, explaining he isn't fighting out of anger or hate, but out of love for his granddaughter.

Exdeath's appearance in Dissidia Final Fantasy gives a new angle to his motives and personality. His confidence and bravado are shown to come not only from his immense power, but his assurance that, whether or not he succeeds, everything will come to an end and return to The Void. Thus he is not proactive but simply wandering and agreeing to assist other Warriors of Chaos with their schemes. Upon his final defeat in Shade Impulse, Exdeath is more accepting of his defeat than most of the other Warriors of Chaos. Because he strives not only for the elimination of existence, but also for his own eventual demise, he finds pleasure in the feeling of dying. After assuring the Warriors of Cosmos that all will eventually return to the Void, he spends his final moments standing tall and laughing.

Exdeath is an extraordinarily powerful warlock, being able to destroy large areas of land with artificial disasters. For example, he caused the earthquake that sank Ghido's island, and he burned down the Great Forest of Moore. All Galuf and the other Warriors of Dawn could do was seal him because "he kept going down, but wouldn't stay down". Scholars in Castle Surgate also note that the second world was more fertile and vibrant prior to Exdeath's rampage thirty years ago. If his strength is ever depleted, he needs only a brief time to regenerate. Even when he was sealed away, Exdeath could possess monsters and people into doing his bidding to shatter the crystals that acted as his seal. He can shapeshift, as he once transforms into a splinter.

Once Exdeath claims control over the Void, his already great power soars. He can erase any part of existence with a thought, channeling the Void to engulf it and sending it into a random dimension. The only way the Light Warriors can defeat him is when his own power turns against him. When Exdeath is engulfed by the Void and is spat out as Neo Exdeath, he gains more power than ever before since he merges with the destructive power of the Void itself, but at the cost of his sanity, threatening to destroy the universe and himself.

In combat, Exdeath, being the incarnation of countless evil beings sealed inside the tree he once was, is highly skilled in the area of spellcasting. Though he rarely ever uses it, he is decent in close combat with his sword. In Dissidia, he can telepathically control his sword, allowing him to engage in "melee" combat even from a distance.

After the malicious warlock-king Enuo was defeated and the Void was sealed away, humans turned to an alternative solution to purge their land of corruption and terror. The Great Forest of Moore provided a solitary prison for these malevolent souls, and they were sealed within a tree. Many other monsters were drawn to the forest, making it the most dangerous place on the second world. 500 years prior to the events of the game, the various souls residing within the tree made it self-aware and it assumed a humanoid form, a being as evil as the many souls that had spawned him, and Exdeath was born. The sage Ghido sealed him away and maintained it for 470 years before the seal broke.

Exdeath had a castle built upon one of the continents and laid siege upon the kingdoms of the world. The Warriors of Dawn—Galuf, Xezat, Kelger and Dorgann—followed Exdeath to an alternate dimension where Exdeath was defeated and sealed using the power of the crystals within a cave in the forest on the Eastern Continent. Dorgann feared the seal wouldn't last and stayed behind while the other three warriors returned to their world.

Dorgann fell in love with a woman named Stella, and the two married and had a son named Bartz. Five years later Stella died, and not long after Dorgann passed away as well. Dorgann's dying wish was for his son to lead a normal life, and so he asked Bartz to travel the world. Keeping his promise, Bartz became a wanderer, along with his best friend Boko, his pet chocobo.

Exdeath shatters the world's crystals one by one as he begins to take control of the denizens of the world to break them, including the Queen of Karnak and King Tycoon. Exdeath appears to Bartz and his friends in the Ronka Ruins when he is released from his seal when the Earth Crystal shatters.

Exdeath returns to his castle in Galuf's homeworld to resume his reign of terror. Galuf and his granddaughter Krile rally a counter-attack and the remaining Warriors of Light follow the two, but are soon captured by Exdeath's minions and used as hostages to keep Galuf from attacking his castle. Galuf saves his friends and the party fights their way back across the Big Bridge, defeating Exdeath's lieutenant, Gilgamesh. Exdeath erects a barrier around his castle, sealing himself inside.

Exdeath makes an example of his enemies when he sinks Ghido's island. The sage later reveals Exdeath is seeking something in the Great Forest of Moore where he was created. The warriors venture to the forest and break the seals that bind what Exdeath seeks, but the seals turn out to be the second world's crystals, and Exdeath was using the Light Warriors all along. Exdeath uses the crystals' power to torture the Warriors of Light, but Galuf resists and takes on Exdeath alone. Galuf dies after fending Exdeath off, and one of the crystals shatters. Afterward, Krile becomes a Light Warrior in his stead.

The Light Warriors confront Exdeath at his castle where he had taken the remaining crystals. The crystals shatter, merging the two worlds, and Exdeath resurfaces disguised as a splinter in Krile's hand. At Ghido's Cave that is again above sea level, Exdeath reveals himself and his true goal: to control the Void and return the world to a state of nothingness. The Void had been sealed away in the Interdimensional Rift when the worlds were split, but now when the worlds are recombined the Rift reemerges over Castle Tycoon. Exdeath seizes control of the Void, sending parts of the world into its depths as demonstration of its power. He takes command of the Demons of the Rift, promising to build for them a world of desolation.

Under Ghido's guidance, the party acquires the newly reformed Sealed Tome and uses it to retrieve the Sealed Weapons of Castle Kuza. The Light Warriors venture into the Rift to confront Exdeath, but by the time they reach him he has mastered the Void and returned to his true form: a monstrous tree. Exdeath sends the Light Warriors into the Void, but is thwarted by the spirits of the Dawn Warriors who restrain the Void and save the Light Warriors. After a heated battle, Exdeath is engulfed by the Void transforming into Neo Exdeath—a being of hatred and nihilism desiring to erase all existence, including his own, for eternity. Neo Exdeath is defeated, and disappears, releasing his control of the Void, and the world is restored with new crystals being born.

The Sealed Castle houses a random enemy called Exdeath's Soul, which is similar to the battle with Exdeath at his castle.

Exdeath's theme is "The Evil Lord X-Death", which begins with a theme similar to the one from the famous murder scene of Alfred Hitchcock's Psycho and further in, an evil laugh is heard. The theme is played during cutscenes where Exdeath appears. Throughout the theme, measures can be heard from the Final Fantasy IV theme, "Ring of Bomb" compounded by dramatic strings that culminates the suspense.

The theme "The Decisive Battle" is also connected to Exdeath, playing in all of the battles against him. It shares similar tunes with "The Evil Lord Exdeath". This theme also appears in the Dissidia Final Fantasy, Theatrhythm Final Fantasy games and Final Fantasy XIV.

Exdeath has appeared in the following games throughout the Final Fantasy series:

Exdeath has made key guest appearances in the following non-Final Fantasy games:

Although Exdeath himself does not appear, he is mentioned in the Japanese version of Super Mario RPG: Legend of the Seven Stars as one of the incorrect answers in Dr. Topper's quiz questions, specifically "What's the first monster you see in the Pipe Vault?" (In the localized versions, this was changed to "Chompweed").

In the earlier drafts of the game's story, Exdeath was originally the apprentice of Ghido, who was a tree spirit originally. Instead of seeking to open the Rift to obtain the power of the Void, Exdeath's original goal to destroy the crystals was to open the path to another dimension to resurrect Enuo, who was sealed there by legendary warriors a thousand years ago. During the finale of the game, Enuo would be revived and Exdeath would transform into a branch to enter his body, becoming Neo Exdeath.[1]

Artwork of Exdeath by Yoshitaka Amano.

Sketch of Exdeath by Yoshitaka Amano.

Exdeath is releasing from his seal.

Exdeath appears in front of the Warriors of Light. 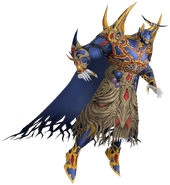 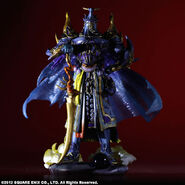 Exdeath is a portmanteau of "death" and the Latin prefix ex to mean "one who exceeds death" (死を超える者, Shi wo koeru mono?).[2] This may symbolize Exdeath's birth from evil spirits.

In Final Fantasy XII and Final Fantasy Tactics Advance, Exdeath was translated to "Exodus". The Esper Exodus resembles Exdeath's knightly form with tree-like qualities, while the Totema pays homage to his tree form.