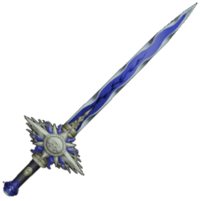 The shining sword of legend...? Seems a little underpowered, but talk about legendary handling!

The Excalipoor (エクスカリパー, Ekusukaripā?), sometimes called the Excailbur, the Excalipur, the Excalipar, or the Caliburn, is a sword in many Final Fantasy games. It is usually related to Gilgamesh. Often confused with the Excalibur, it deals just 1 damage. In spite of this, its stats are relatively high, and as such, the game will equip it to a character when selecting the optimize equipment function. Gilgamesh mistaking Excalipoor for the Excalibur has become a running joke, and in his later incarnations he has wielded various knock-off weapons of many iconic swords from the series.

Excalipoor (Caliburn in the GBA version) is obtained in the PSP and GBA versions after completing Cecil Harvey's Lunar Trial with two mistakes. The sword has only +1 Attack, +25 Accuracy, and does very low damage instead of only 1 HP. This weapon is metallic.

Excalipoor is dropped by Gilgamesh after he is defeated in the Depths. It provides 1 Attack, 99% Accuracy and cannot be sold.

The Excalipoor is a sword wielded by Gilgamesh, who has confused it with the Excalibur. When he uses it in battle, he is seen by Exdeath, who banishes him to the Void for his incompetence. After his defeat, Excalipoor can be equipped to a character. Though its Battle Power is high, it always deals 1 damage, and it never misses. It is thus useful when fighting the Skull Eater enemy to AP grind, who has high evasion but only 1 HP.

It can also be equipped to do high damage with Goblin Punch, which deals damage based on the equipped weapon similar to the Attack command, but does not include the code causing Excalipoor to deal only 1 damage. In addition, it is a powerful weapon when thrown in battle, often dealing 9999 damage to a single enemy.

The Excalipoor appears in the Advance and 2014 versions. It can be bought in the Jidoor Auction House for 500,000 gil. It has an attack power of 1, and enables the Bushido and Runic commands. If it is bet in the Dragon's Neck Colosseum, the player will battle against an Onion Dasher for a Merit Award.

Win or lose, Gilgamesh challenges the party to a fight for the Excalipoor. If he loses, he becomes an esper. When his magicite is used in battle, Gilgamesh is summoned and will execute one of four attacks at random. One of these is the Excalipoor, which deals damage worth 1 HP. This alludes to Final Fantasy VIII, whose mechanic with Gilgamesh works similarly.

The Excalipoor is one of the four weapons wielded by Gilgamesh. He will use it at random when summoned to deal 1 HP damage to enemies.

Excalipoor is a weapon that is occasionally available for purchase with Login Points that first appeared May 2015. It is a sword with a DMG stat of 1 and a Delay of 240. Purchasing two Excalipoors and synergizing them together produces Excalipoor II, which has a DMG stat of 2, Delay of 233, and exclusive access to the Knights of Rotund weapon skill, a joke version of the Knights of Round weapon skill.

The Excalipur is a greatsword exclusive to the Zodiac versions. It provides 1 Attack, 20 Evade, and a 20% critical rate rather than being able to combo. It requires the Excalipur license for 150 LP. The player receives it from Montblanc for completing the Gilgamesh hunt. It is also a rare steal from Omega Mark XII in Trial Mode Stage 99. It is useful for poaching weak enemies at high levels.

Forged in memory of the legendary sword Excalibur. Although only a replica, this sword is extremely sharp, and has served a goodly number of adventurers.

One of the Artefacts obtained from an Errand is the Excalipoor. There is another similar spoof for the sword Ragnarok, Nagrarock. This one, however, is usable in battle and is hilariously useful for inflicting Toad on striking.

The Excalipoor is a level 99 sword and the strongest sword, having an Attack increase of 68. However, it also has the effect of "Physical Damage -100%" while leaving magical attacks fully effective. It is also one of Gilgamesh's summon effects, which, if used, drops the user's Bravery to 1.

Excalipoor is one of Gilgamesh's eight weapons, used at random when he attacks and when he enters EX Mode. When used, all Bravery damage is reduced to 1. In Gilgamesh's EX Burst, Ultimate Illusion, failing to pick out the true Excalibur from a set of eight swords including seven Excalipoors results in the burst doing only one point of Bravery damage over a series of four hits.

It is also present as an effect of the Gilgamesh summon and as an equippable weapon, with its stats identical to its previous appearance.

Though it has betrayed many masters, this blade is still coveted for its power.

Excalipoor grants +1 to Attack. It can be equipped by Knight, Mystic Knight, Cecil, Bartz, Cloud, Squall, Seifer, Steiner, and Vaan.

The Excalipoor was given out as an April Fool's Day 2016 gag-gift. It has no bonus ability, grants 3,780 equipment upgrading points, and is worth 10,000 gil. It is the only weapon whose stats do not change as it levels up.

An imitation of a legendary holy sword.

A sword modeled after the Excalibur. Though at first look it appears as if it would boast high ATK, this couldn't be further from the truth. Still, many seek this sword, which is surprisingly hard to find. It is though this blade was made specifically for such people. Replicated down to the finest detail, one would be pressed to tell it from the real thing just by looking at it.

The Excalipoor is available during the Gilgamesh - (Event) The Big Bridge, the introduction event of Gilgamesh as a summonable "Vision", by defeating the boss Gilgamesh on any difficulty. It is a 7* greatsword that yields 1 attack, is worth 1 gil and can be obtained multiple times. As of yet has it no purpose despite its description suggesting a potential use.

Excalipoor (FFV) is a Sword that provides 1 ATK and 100-150% damage variance. It is obtained during the Final Fantasy V exploration event, Castle Exdeath. 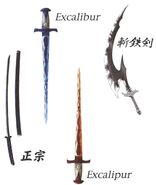 The weapons used by Gilgamesh in Final Fantasy VIII. 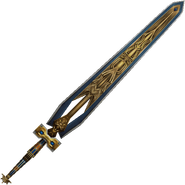 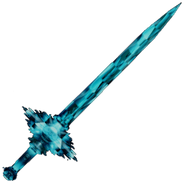 The katakana エクスカリパー (Ekusukaripā?) derives from the Japanese katakana form of the word "Excalibur" (エクスカリバー, Ekusukaribā?), replacing the dakuten on the バ (ba?) with a handakuten for パ (pa?). Therefore "Excalipur" would be an appropriate localization.

The localized name "Excalipoor" adds a pun with the word "poor". "Poor" reflects its nature as an especially weak weapon.

In Le Morte Darthur, by Sir Thomas Malory, Morgan le Fay takes Excalibur and its scabbard from Arthur, giving them to Sir Accalon, and leaving Arthur with a magically created copy. Though it is not stated to be a bad weapon per se, it is not nearly as good as the real Excalibur, nor does the fake scabbard protect him from blood loss as the real one did.

This was done in an attempt to have Sir Accalon kill Arthur in a fight, during which the fake Excalibur is broken, and the real one is reclaimed by Arthur.

Excalipoor was once called Caliburn in the Game Boy Advance version of Final Fantasy IV. In many versions of Arthurian legend, Caliburn and Excalibur are the same sword; however in others they refer separately to the sword King Arthur received from the Sword in the Stone as a boy, and the sword given to him by the Lady of the Lake.