The ultimate sword, used by a legendary king. It was forged in another world.

The Excalibur II (エクスカリバーＩＩ, Ekusukaribā II?), also called Excalibur2, is a recurring weapon in the Final Fantasy series. Like the regular Excalibur, it is usually one of the most powerful swords and is Holy-elemental. It originates from Final Fantasy IX, where it is a trophy item for a successful speedrun playthrough.

The Excalibur II is the most powerful weapon available, equipped by Steiner. It has an attack power of 108, its element is Holy, and teaches Minus Strike, Climhazzard, and Stock Break. It is a well adorned sword, with a red-orange hilt and an opaque-green blade. Obtaining it yields The Ultimate Sword achievement/trophy in the versions that support an achievements system.

Excalibur II is a name of a weapon used by Gilgamesh, but this name only appears in the Japanese version; the English calls it "NOT USED". It is a fake version of Tournesol, one of the strongest weapons. Excalibur II has 30 points in Attack Power and inflicts Sap on hit.

Excalibur2 is the strongest knightsword and provides +87 Attack, +3 Magic, +4 Speed, and +5 Evade. It can be obtained after completing the post-game mission, "Mission 98: The Hero Blade".

An improvement upon perfection, this knight's blade has been honed to a razor-sharp edge.

Excalibur II makes another appearance under the name "The Fallen Angel". It is obtained during the Frimelda quest chain, and is referred to as Frimelda's weapon. It can be bought for 17,800 gil in the shop after creating it in the Bazaar after using a Lightwing Crystal, Mythril, and Hero Tonic, and provides +72 Attack, +4 Speed, +3 Magick, and +5 Evasion.

Excalibur II is one of the strongest swords. It is a level 99 sword with an ATK of 67. It gives +100% Experience Gain, and can be used by Warrior of Light, Emperor, Onion Knight, Cecil, Cloud, Squall, and Tidus. It can be obtained as a drop from defeating the Steiner Friend Card.

Excalibur II is a level 100 sword, but still maintains the same effects as the first game. It can be equipped by Warrior of Light, Emperor, Onion Knight, Cecil, Cloud, Squall, Tidus, Zidane, Exdeath, Lightning, Vaan, Laguna, Kain, Gabranth, and Gilgamesh. It can be obtained as a drop from defeating the No. 1 Moogle Friend Card.

A knight's sword from the faraway world of Gaia. The blade holds an unusual green tone to it. This sword is known back in the world of Gaia as being the strongest of all knight swords, and is also notorious for how difficult it is to obtain.

Excalibur II is a Great Sword that is obtained as Steiner's Trust Master. It provides 130 ATK and is Light-elemental.

A holy sword given to a great king by the Lady of the Lake, it is the counterpart to the blade with the selfsame name pulled from a great stone. Possessed not only of incredible power, it is bestowed with the blessings of the earth and sea, signifying its wielder as the rightful ruler of the world.

Excalibur II is a sword provides 47 P.ATK, 90 Aim, deals light-elemental damage, casts Shining when used as an item, and deals 50% more damage to demonkind. It can be found in Via Celestio. 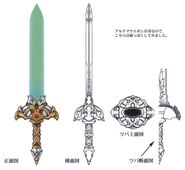 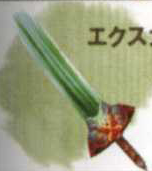 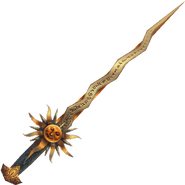 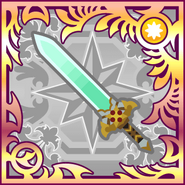 [view · edit · purge]The Excalibur is King Arthur's sword, the one he obtained from the Lady in the Lake, after the one he pulled from the stone broke. Excalibur itself is thought to be derived from Caladbolg, which in itself may be drawn from the Welsh Caledfwlch, which can be latinised as Caliburnus. The legends state the sword was virtually peerless and only passed to the chosen. However, King Arthur was mortally wounded while wielding the sword by his son, Mordred in the battle of Camlann. Upon his death, it was either Sir Lancelot or Sir Griflet who, after much hesitation about discarding such a powerful sword, returned the Excalibur to the Lady in the Lake.