Plants that attack people... I guess they don't call it Evil Forest for nothin'.

The Evil Forest is a location in Final Fantasy IX. It is a vast forest that lies underneath the Mist at the foot of the cliffs immediately south of Alexandria, with the Ceebell River running through it. It can petrify and is inhabited by dangerous plants and monsters resulting from the Mist.

The Evil Forest is visited once at the beginning of the game and cannot be entered again. Approaching the entrance to the forest results in a message that says "Petrified. Cannot enter." If the player rides Choco over the forest, he will cross it as if it was solid ground rather than a regular forest that is walked through. In the endgame, an Iifa root blocks the entrance, even though the Evil Forest was already inaccessible.

When Tantalus Theater Troupe escapes Alexandria with Princess Garnet in the M.S. Prima Vista, Queen Brahne downs it with cannonballs. Heavily damaged, the theater ship crashlands in the Evil Forest.

Many on board are scattered overboard and Garnet and the black mage Vivi are caught by a monster called Prison Cage. Zidane, a member of Tantalus, and Steiner, a knight of Pluto and Garnet's bodyguard, attempt to rescue them.

After saving Vivi, Steiner and the former contract a poison from the plant and return with Zidane to the Prima Vista crash site where Tantalus members Marcus, Blank, and Cinna are tending to the survivors. Benero and Zenero hold an uncooperative Steiner prisoner, and Blank and Zidane help Vivi. Zidane wants to save Garnet, but his boss, Baku, refuses to let him do it, insisting that Tantalus takes priority.

Zidane fights Baku for the right to leave Tantalus. Blank gives Zidane some medicine for Garnet, and Zidane sets off with Vivi and Steiner. Baku sends Blank after them with a Continental Map soon after and Blank helps Zidane, Vivi, and Steiner rescue Garnet from the Plant Brain.

Plant Brain's defeat awakes the forest that begins to petrify, with everything from trees and branches to monsters turning to stone. Zidane and his friends make a quick escape while being pursued by Plant Spiders. As Zidane is about to be grabbed by one, Blank pushes him out of the way and gets caught himself. He throws the Continental Map to Zidane before being fully petrified, and the rest escape the forest. After spending the night they leave for the Ice Cavern.

Baku orders Marcus to travel to Treno to source a Supersoft from a nobleman. Marcus returns to the Evil Forest to rescue Blank, and the two make their way to Alexandria to assist Zidane in escaping the castle with Garnet and Vivi. Blank makes a full recovery and captains the Blue Narciss for the party.

The party enters the Evil Forest in search of Garnet. They find her captured by Prison Cage and are forced into battle. Zidane will be automatically tranced. After its defeat the monster retreats with Garnet. While the rest of the party are talking the monster returns and captures Vivi, forcing the party into another battle. This time they defeat the enemy, but before it dies it spews poison on them.

Zidane can examine the river.

I wonder where this river goes...

When Zidane enters this area he startles a moogle who hides in a tree trunk. The spring can be used to restore HP and MP.

Running through the swamp will show a cinematic sequence of the Plant Brain in its nest.

The party encounters the Plant Brain and must defeat it to rescue Garnet. Blank will join mid-battle to help the team. After the battle Zidane gives Garnet some medicine before Plant Spiders appear and the party have to flee.

The party are trapped and attacked by four plant spiders.

The exit is petrified when the party escapes.

Near the crash site is a moogle named Mosco who has a letter for Zidane:

The letter the party delivers from Kupo in Alexandria Chapel to Monty at the Evil Forest springs:

Monty has another letter with him:

Monty escapes the forest to Pinnacle Rocks as the forest petrifies. Mosh from Alexandria sends him a letter to ensure he is alright. In the Japanese version of the game, upon defeating the Plant Brain, Monty makes it more specific that he has been living in the Evil Forest for 20 years and never saw anyone escape during that time.

Cinna runs an item shop outside the Prima Vista.

The Evil Forest area on the world map consists of Gunitas Basin and Melda Plains.

Garnet has been taken captive, and Zidane, Vivi, and Steiner make their way through the Evil Forest to find her.

The theme that plays in the Evil Forest is called "Awakened Forest". In an Active Time Event, the Prima Vista band plays a version of "Rufus' Welcoming Ceremony" from Final Fantasy VII. 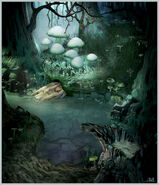 Artwork of the sealed Evil Forest.

Concept art of a character and a creature in the Evil Forest.

Camp site outside the forest.

Evil Forest on the world map. 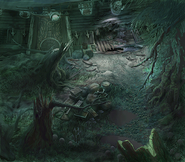 The crash site of the Prima Vista. 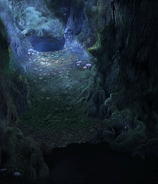 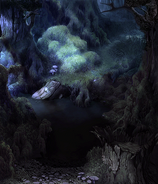 A battle background in the Evil Forest, when fighting the Plant Brain.

Escaping from the forest.

Camp outside the forest.