Cid Pollendina: Oh, shut up and help me remodel the Evasion page!
Please expand this article into a full one. The following tasks need to be completed:

Evasion (回避, Kaihi?), also called Evade, Evade %, and Defense%, is a common statistic in the Final Fantasy series. It can be modified by equipment or spells, such as Invisible. The higher a character's Evasion, the more likely they are to avoid being hit by a physical attack. Evasion is generally compared to Accuracy and Luck to determine if the player is hit or if they dodge. Cactuars traditionally have very high Evasion.

In many games physical evasion is the only type of evasion, with magical attacks having 100% accuracy.

Evasion is split into a number and a percentage value. The Evasion number determines how many attacks a character may be able to evade and the percentage indicates the chance to evade. In addition to determining chance to avoid physical attacks, the Evasion percentage affects which order characters and enemies act in battle. The Evasion number can be increased by being targeted by enemy attacks, while the Evasion percentage is dependent on Agility, evasion values of equipped weapons and/or shields, and the total evasion value of equipped armor (which is usually negative):

Weapon evasion is determined by:

, ItemEvasion being the weapon's evasion percentage.

Shield evasion is determined by:

, ItemEvasion being the shield's evasion percentage.

In the 3D remake, the evasion stat does not appear to exist. All physical attacks dealt by the player or enemies do not miss. For example, a Level 1 Goblin in the Altar Cave will have no problems hitting a level 99 party, and will deal a minimum of 1 damage, or 0 if the party member is in the back row. Similarly, magic attacks do not miss but do not factor in row formation.

The base Evasion is the sum of all evasion ratings of armor equipped. All unequipped sections such as helmet, armor, armlets, have a evade value of 10%.

If the target has Blind status:

If target has Mini or Toad status:

If Aim is used on target:

The base Evasion is the sum of all evasion ratings of armor equipped. All unequipped sections such as helmet, armor, armlets, have a evade value of 10%.

Evasion is determined by what armor the character has equipped.

There are five different ways for the characters to evade an attack, a character can either evade with a shield, a sword, a dagger, a cape, or with Interceptor (Shadow only). It should be noted that not all daggers or swords can evade enemy attacks, only a few specific swords and daggers can be use to evade enemies attack. While in Magitek Armor, none of the aforementioned evading animation will occur and the evaded attack will merely miss the target character.

Formula for Dexterity based Defense%:

Formula for Luck based Defense%:

Whether a physical attack hits or not, is determined by the attacker's Hit Rate and Luck, and the target's Evasion stat and Luck, using the following formula:

Units with 255% hit rate always hit regardless of the target's stats. Units with Stop have their Evasion fall to 0%.

When a party member or opponent is targeted for a physical attack, two checks are performed to decide if the attack will hit or miss. If the result of the first check is in favor of the target, the second check is not performed.

If the target is Vanish status, the first check cannot favor the attacker and evasion is guaranteed.

With Accuracy+ equipped, neither check is performed. Attacks will always hit.

The ability Evade & Counter is the improved version of Counterattack ability, and mostly renders Evasion redundant as it guarantees evading; although Evade & Counter does not trigger on whole party attacks or attacks which themselves are a counter. The maximum Evasion stat matches the other stat maximums at 255. Magic is unaffected by Evasion, as most magic has a 100% hit rate; those that don't still have a fixed hit rate that is unaffected by stats.

For more information on the mechanics of Evasion, see here.

Evasion is a percentage value of how often a character evades a physical ability.

The color for the Evasion gauge in the menu is purple.

All jobs have an Evasion statistic. Evasion is compared to Accuracy to determine if a physical attack will hit. If an attacker's Accuracy is equal to the defender's Evasion, he will hit about 75% of the time.

Note: The listing for Thief does not include the added Evasion granted by Evasion Bonus. At level 75, a Thief will actually have +40 Evasion as to what is listed here.

Though shield and weapon evasion are in fact two different stats, they are shown as one evasion stat in the in-game menu. Uniquely, shields add only to evasion, and do not increase the wearer's defense.

Player characters do not parry by default, but only when the accessory Jade Collar is equipped, which provides 30% parry. Many enemies have the same effect as a passive ability, gaining 25% evasion. Against enemies that parry a lot the player can equip the accessory Cameo Belt, which ignores the effect of Block and Parry.

Tough bosses have this trait as a passive ability, making shields useless. The player can also use a crossbow, because it cannot be parried. Guns, measures, Healing Rod and Rod of Faith can't be blocked or parried, but the wielder can miss.

The "other conditions" include a blind character whose accuracy is halved. Weather affects the accuracy of bows and crossbows, lowering accuracy during heavy rain, blizzard and sandstorm. The characters can't evade attacks while they are fleeing.

Evading the enemies' attacks depends on when the player moves their character and there is no Evasion stat as such. Magic cannot be evaded.

There is no Evasion stat, but evading can be performed in the Sentinel role via either the auto-ability Evade or the command ability Elude. The accessory Nimbletoe Boots improves these skills, but does not work alone. Evade and Elude activate under different conditions and thus will not compound.

Evade increases evasion chance by 20%. Evade will only take effect if:

Elude increases the evasion chance by 50% for as long as the character is using the ability.

Nimbletoe Boots increase the evasion chance by another 10%, but only if evasion via either Elude or Evade can take effect. Only certain attacks can be evaded. If the attack cannot be evaded then any attempt to evade will always fail. Evading an attack can trigger a Counterattack.

When the player attacks a unit, it has a chance to dodge the player's attack with four parameters:

Also, while charging magicks or abilities, that unit's evade rates for both physical and magickal attacks are reduced to 0. Shirahadori, First Strike, and Archer's Bane are independent of the Evade stats and outright stop attacks. The ability Concentration ensures a 100% hit rate with physical attacks.

Physical attack evasion depends on the attacker's position relative to the target. These equations will produce a percentage from 0 to 100. They take into account all four evasion parameters.

When attacking from the front:

When attacking from the side:

When attacking from the rear:

It can be difficult to determine exactly which side the unit is attacking, especially with ranged attacks. The game basically decides if the player's forward, sideways, or rear distance from the opponent is greater, and takes that as the orientation. In the event of a tie, the foremost direction is the winner(front over side, side over back).

Most attacks have 100% accuracy. Some abilities have 50% in exchange for more power while other abilities have 150% accuracy in exchange for less power. Debuffs' accuracy is based on a hidden evasion stat which varies by race and by monster. Each class has a set evasion stat which is displayed on the stat screen. This stat can be raised through the use of certain items.

The higher the number, the better the chances of evading enemy attacks.

The degree to which once can dodge Weapon and Talent attacks.

The Evasion stat determines how often the party members can avoid enemies' physical attacks. Magic cannot be evaded at all. The Evasion depends on the currently equipped crown and some equipment can also give boost to Evasion. The Ninja crown has the best Evasion. 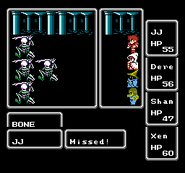 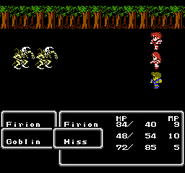 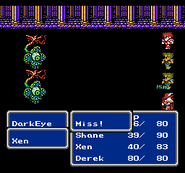 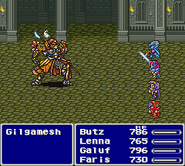 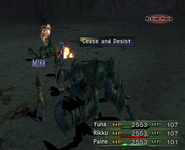 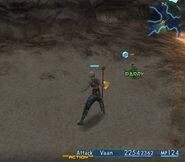 An enemy parries an attack in Final Fantasy XII. 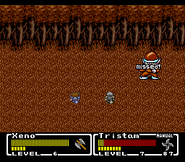