This weapon is a manifestation of the goddess's destructive aspect. Increases ATB gauge recharge rate.

Eurytos Bow is a high-ranked bow exclusive to the 3D remakes, providing 95 Attack and +5 Strength. It can be equipped by the Onion Knight and Ranger, and can be found in Bahamut's Lair.

Eurytos's Bow is a mid-ranked bowsword for Serah, providing 40 Strength, 60 Magic, ATB Rate: +40%, and Buff Duration (provided through synthesis). It can be bought for 5,200 gil, as well as trading in Starblossom Seed x2 and Superconductor x2 from Episode 5 onward. 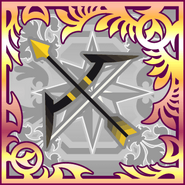 [view · edit · purge]According to Homer, Eurytus became so proud of his archery skills that he challenged Apollo. The god killed Eurytus for his presumption, and Eurytus' bow was passed to Iphitus, who later gave the bow to his friend Odysseus. It was this bow that Odysseus used to kill the suitors who had wanted to take his wife, Penelope.