The Forbidden Land, Eureka is an optional dungeon in the game Final Fantasy III which contains some of the best equipment in the game. A gateway to it can be found at the bottom floor of the Crystal Tower, but the Eureka Key is required. Doga and Unei unlock the Eureka Key, and give it to the Warriors of the Light, granting them access to Eureka, knowing they need better equipment to fight Xande. This equipment was sealed away long ago because considered too powerful for humans to behold.

In the original NES version, the Sage and Ninja jobs are found in this dungeon, being given to the player once they have defeated Scylla.

In the final area of Eureka, the player can find three shopkeepers (one of whom is reached via a hidden passage) selling some of the best spells, summons, and equipment in the game. This is also the only place where Shuriken can be purchased, though at a ridiculously high price.

Hidden from plain view. (Found by walking to the right, through the wall on the screen where the other two shopkeepers stand.)

The optional bosses fought here are a manifestation of the weapon they are protecting.

Added in Patch 4.25 "Rise of a New Sun," The Forbidden Land, Eureka, is an instanced area that up to 144 players can explore simultaneously. Though it pulls from Final Fantasy III in its name and in the concept of an extensive side area you can explore, the plot primarily includes references to Final Fantasy V. The player works with Krile to find out what happened to the Students of Baldesion after the disappearance of the Isle of Val, complete with flashbacks involving her grandfather.

This once prosperous capital of the Kashka Dynasty was destroyed in the Cataclysm, along with the vast legacy of its royal family. It is now a necrohol, populated by spirits drawn to the shades of its past glory.

The Forbidden Land Eureka was mentioned as one of the wonders. 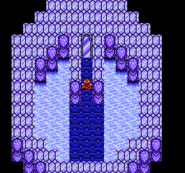