Etro's gate (女神の門, Megami no Mon?), also known as the unseen gate and the Door of Souls (魂の門, Tamashii no Mon?), is a gateway to the afterlife in Fabula Nova Crystallis: Final Fantasy. It is operated by the goddess Etro. The shape of the gate resembles an eye, perhaps in relation to how Etro can see all things from Valhalla on the other side of the gate, but can only observe, because to influence the mortal world, the gate must open.

According to the official mythology, the universe is divided in two halves: the visible world (the world of the living) and the unseen realm (the world of the dead); should the balance between the two worlds be broken, the universe is in danger of collapsing. Despite this, Bhunivelze and his fal'Cie creations are compelled to find the gate to ensure the former becomes immortal.

XII. The Door of Souls[]

When our earthly vessels meet their end, the souls they housed must leave this world. Would the path of their migration not be the same one as our departed gods? Must they not pass through the same doorway the Divine employed to reach that place that lies beyond?

If this is the case, it stands to reason that, should a great many lives at once be cut short, a flood of souls would surge through the aforementioned portal. The Door would be thrown wide, and perhaps we might even glimpse the gleaming light of Divinity beyond.

—On the Nature of Fal'Cie

Children of Hallowed Pulse scour earth, searching substance for the Door. Those of Fell Lindzei harvest souls, combing ether for the same. So have I seen.

The Door, once shut, was locked away, with despair its secret key; sacrifice, the one hope of seeing it unsealed.

When the twilight of the gods at last descends upon this world, what emerges from the unseeable expanse beyond that Door will be but music, and that devoid of words: the lamentations of the Goddess Etro, as She sobs Her song of grief.

The instant Etro's gate opened, a world-devouring darkness slipped through from Valhalla. The goddess turned back the river of time and that terrible darkness—the Unseen chaos—was sealed away.

Her power exhausted, Etro fell into a sleep from which she would never awaken. It was Lightning who sensed that someone meant to exploit that weakness and destroy the goddess for good. She learned of the man named Caius Ballad.

If the goddess is destroyed, the chaos of the unseen realm would be unleashed, and the mortal realm devoured by Valhalla. Lightning decided to stand and fight, to protect Etro and see her benevolent will upheld.

Upon a person's death their soul passes through the gate to the afterlife. The mechanical fal'Cie lack souls and thus cannot access Etro's gate. The fal'Cie believe the Maker, the god who created the fal'Cie and the world, has departed beyond Etro's gate, and devise a plan to send as many souls through it simultaneously as possible by destroying Cocoon, believing it would force Etro's gate wide open and reunite them with their Maker while the world would be reborn. This would destroy the balance of the world, and Etro stopped the first attempt during the War of Transgression by turning the l'Cie tasked with destroying Cocoon into crystal.

Lightning's group learns of the fal'Cie's plan from Cid Raines in the Fifth Ark. Later, before ascending to Edenhall, the party observes immaterial crystalline specks of energy glimmering in the air. When they wonder of the significance Barthandelus appears in the guise of Galenth Dysley, explaining the phenomenon means the Maker is soon to return. As Barthandelus disappears inside the tower above Edenhall, Etro's gate appears on the sky of Eden, shining brightly.

After the party defeats Orphan the lights of Cocoon go out, all but of the mysterious light that is Etro's gate. As Ragnarok crystallizes Cocoon, Etro frees the Pulse and Cocoon l'Cie from their fate before the gate closes.

The gate itself is only ever mentioned in the two final Analects, and in the battle theme "Born Anew", whose translated lyrics spell, "l'Cie, you promised to open the gate, full of eternal light!"

Due to Etro freeing the l'Cie of their fate, chaos leaks into the Visible World and drags Lightning through the Historia Crux to Valhalla, the middle world between life and death, while warping the timeline. During Lightning's battle with Caius Ballad in Valhalla, Noel Kreiss emerges from Etro's gate that opens over the Temple of the Goddess, but Lightning rescues him by summoning Bahamut to catch him mid-air.

When Noel enters his dream world and relives his final days in the Dying World, he prays for Etro to gift him with the power of chaos so he can follow Caius to Valhalla. A light opens on the sky and he is pulled towards it, presumed to be Etro's gate, but before he can enter it, Serah gets through to him and he realizes he was merely reliving his memories. When Lightning meets with Noel and Serah at New Bodhum in the year 700 AF, she tells them the nature of Etro's gate and how Caius intends to finish what the Cocoon fal'Cie had started in the slaughter of Cocoon's people to force Etro's gate wide open—not to have the Maker remake the world, but to save Paddra Nsu-Yeul from her endless cycle of reincarnation.

After defeating Caius in Valhalla and solving the final paradox, Serah and Noel emerge from Valhalla using a Time Gate. When Noel kills Caius his Heart of Chaos stops beating, killing Etro, ending her role as the balancer between the two worlds and the unseen chaos breaks free. The chaos smashes Etro's gate apart and enters the mortal realm. With Etro's gate no longer present to act as a gateway between the worlds of living and dead, Valhalla and Gran Pulse merge into a new world, which in time becomes known as Nova Chrysalia.

Etro's gate is depicted in multiple places throughout Orience, even though it is not mentioned by name. Relic terminals and the Altocrystarium have Etro's gate depicted on them. The shape of the Killsight icon may be intended to resemble Etro's gate and the backs of Ace's cards have the symbol of the gate.

When Arecia Al-Rashia summons Bahamut ZERO, an image of Etro's gate appears in the summoning crest, Bahamut ZERO emerging from the gate. Pandæmonium has images of Etro's gate and eye-like symbols based on Etro's gate inscribed throughout its architecture, including in the sky over the palace

. The emblems for each nation of Orience seen in Pandæmonium

also have the symbol of the gate on them, symbolizing how each Crystal wants to birth the Agito: the one who can open Etro's gate. The Rursan Arbiter has a purple glowing eye on his helmet that also resembles the gate.

Arecia's reasons for creating Class Zero is to use souls with great power to force Etro's gate to open. This becomes known as the legend of Agito, recorded in the Akashic Records (though it doesn't appear in-game, an artwork for the tome exists and displays Etro's gate on the cover

). Serving Lindzei in opposite to Arecia serving Pulse, Gala believes the sacrifice of billions would be a better method, and sends his forces to slaughter everyone when Tempus Finis begins. After they both fail, Arecia and Gala reset the world and prepare for the next experiment. The two continue their experiment for 600,104,972 spirals. Eventually, Arecia is convinced to end the experiment and leave Orience. Whether either Arecia's or Gala's method would actually work to reveal the gate is unknown, as the spiral revolves over 600 million times without result. Whether the depiction of Etro's gate in Pandæmonium is the actual gate or simply symbolism is ambiguous, but stepping through it leads to a void-like area.

According to legend those who die will meet Etro when she opens the gate to give the departed souls entry to the afterlife. Near-death experiences may grant one special powers, as when one is dying and one's soul pulls back from the borders of mortality into the afterlife, upon seeing the light of the opening gate, they may gain the graces of the Kingdom of the Dead and be bestowed with a great power. Noctis Lucis Caelum was said to have this blessing through his experiences.

"Etro's Gate" (エトロの門, Etoro no Mon?) is a track that appears in Final Fantasy XIII-2 and was composed by Masashi Hamauzu. It plays during the opening scene of Lightning being trapped in a paradox and falling through the Historia Crux. It has the slow-paced melody of "Blinded By Light" included in several moments.

Etro's gate appears behind Orphan in Final Fantasy XIII when Fang turns into an incomplete Ragnarok. The montage of memories of the party's journey that displays through an eye-shaped lens soon after might represent Etro having followed their journey. The gate remains in place for the final battle with Orphan's final form. When viewed from the front, Orphan's final body and the gate form the appearance of an eye.

The presence of Etro's gate is accompanied by flashing crystal shards in the air. This is seen in Final Fantasy XIII when crystals begin to glow in the air as Etro's gate opens in the sky. The same phenomenon is seen in Final Fantasy XIII-2 where the air glimmers with crystals when Lightning is met at the pier in New Bodhum in 700 AF, having entered from Valhalla. The same phenomenon also appears in Final Fantasy XV, where it was initially described as the light seen when someone is near death. In the final game the glimmering "soul crystals" represent the bonding of the souls, magic of the Lucian royals, and the afterlife. In FINAL FANTASY XV UNIVERSE E3 2017 Trailer, at 2:23 an image resembling Etro's gate appears that highlights various aspects of Final Fantasy XV Universe.

Etro's gate is depicted with eye motifs. The gate itself is eye-shaped, and during the final battle forms an even clearer eye shape when coupled with the fal'Cie Orphan. In Final Fantasy XIII-2 Etro's symbol is imposed over the seeress's eyes when they have a vision. Final Fantasy Type-0 has many eye-like depictions of the gate. In the real world the Eye of Providence is a symbol showing an eye often surrounded by rays of light or a glory sometimes interpreted as representing the eye of God watching over mankind (or divine providence).

Etro's gate opens on the sky of Eden in Final Fantasy XIII.

Etro's gate in the Narthex in Final Fantasy XIII.

Noel being pulled toward a light in the sky, presumed to be Etro's gate.

Symbols of the four nations in Final Fantasy Type-0. 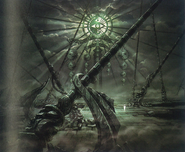