Final Fantasy Wiki
Register
Don't have an account?
Sign In
Advertisement
in: Characters in Before Crisis -Final Fantasy VII-
English

They are members of SOLDIER, and are friends of Zack Fair. While on patrol in Icicle Inn they are captured by AVALANCHE Ravens and brought to a base nearby to be genetically transformed into Ravens themselves. Episodes 7 and 8 features the Player Turk attempting to find and rescue them from the facility.

The Player Turk is sent to investigate the abduction of two SOLDIER members, Essai and Sebastian, in Icicle Inn. Discovering a facility in the snow, the Player Turk infiltrates the facility to ascertain whether or not it was an AVALANCHE base.

Discovering the abducted SOLDIER members, the Player Turk frees them and sends them to a Shinra base near-by. Rendezvousing with a Turk who had been investigating another part of the facility, the pair manage to escape outside where they are caught in a fight against Fuhito and his Ravens. Saved by the timely arrival of Martial Arts (Female), the Turks all retreat to the Shinra base.

Massing a search and destroy task force to attack the AVALANCHE base, Zack Fair is sent by Shinra to bolster the their forces. While embarking to their destination, a breaking bridge leads to Zack and the Player Turk being separated from the main force as the force is led into an AVALANCHE ambush and the remaining SOLDIERs, Essai and Sebastian, are re-captured.

As Zack moves to free them, the Player Turk are instructed by Verdot, who is by now noting that AVALANCHE is receiving information from within Shinra, to assist in rescuing the SOLDIERs. Making to the captured pair first, the Player Turk discovers that they have been warped to do AVALANCHE's bidding.

The Player Turk is saved by Zack, who attempts to hold off his friends while pleading for them to fight their way back to their senses. While successful, the attempt cost Essai and Sebastian their lives and Zack remains to mourn their passing as the compound's self-destruct is activated. As he tells the Player Turk to go on ahead, he is confronted by the Raven responsible for capturing Essai and Sebastian and discovers that the process the Ravens undergo leave them without their personalities; becoming mere drones of their former selves.

After Zack and the Player Turk escape the destructing compound, Zack erects a small memorial for his deceased friends.

Essai and Sebastian are fought as bosses in Chapter 8. They each have infinite HP, and so are impossible to defeat.

During the events of Crisis Core -Final Fantasy VII-, Zack would visit their grave site a few months after Angeal Hewley's death in a DMW sequence with Tseng. Tseng comments how their conflict with AVALANCHE has resulted in losses, while Zack states that at least Essai and Sebastian were brought to their senses and he can still visit them.

During the time the Player Turk is infiltrating Icicle base with Zack in Before Crisis, Zack fights using the Buster Sword, which means that this event happened during the events of Crisis Core -Final Fantasy VII- after the Buster Sword is given to him by Angeal, but before the scene in which Zack and Tseng visit Essai and Sebastian's grave. 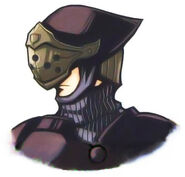 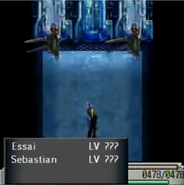 Battle against Essai and Sebastian.