After the meaningless war had ended, the espers fashioned a new realm to which they exiled themselves.

The Esper World is a location in Final Fantasy VI in the World of Balance. It is located in another realm, and connected to the human world via a cave leading to a massive gate. It is where the espers live in peace, away from humans who would abuse their powers.

After the War of the Triad the Warring Triad gave the espers free will and turned themselves to stone, their last request was the espers keep their powers safe from humans. The espers fashioned another world and moved there to live away from humans, taking the petrified statues of the gods with them. It is speculated by Terra that the Warring Triad's power maintains the connection between the two worlds.

A thousand years later, a human girl named Madeline stumbled upon the Esper World, and fell in love with an esper named Maduin. They gave birth to a baby girl: Terra. The espers disapproved of this and Madeline had to live under the Esper Elder's watch.

Two years later a man named Gestahl invaded the Esper World, capturing many espers. The Elder began a spell to sweep Gestahl and his soldiers out of their world and then seal the gate at the cost of his life. As he began casting the spell, the other espers blamed Madeline for the invasion, accusing her of being in league with him. Madeline fled to the gate with the infant Terra and Maduin followed her. The two were caught up in the Elder's spell and cast out of the Esper World alongside Gestahl, who struck down Madeline and seized Maduin as another captive. The captured Espers were taken to the Magitek Research Facility to be experimented on and drained of their powers.

The Esper World was at peace for a time, until sixteen years later when Terra returned to the Sealed Gate with the Returners to plead with the Espers for aid attacking the Gestahlian Empire. By sheer coincidence, a handful of espers lead by Yura had gathered near the gate to ponder a rescue attempt of their captured friends. The power link between Terra and Yura opened the gate, and Yura and his comrades rushed through. However, once in the human world, the espers lost control of their powers and decimated Vector, killing many innocents and crippling the Empire. Meanwhile, the Sealed Gate closed again and a rockslide closed it off.

Gestahl told the Returners he wished to call a truce and convinced them to aid the Empire in location the rogue espers. Terra and the Returners located Yura and his band and convinced them to meet with the Empirea at Thamasa, but Kefka revealed it was a trap by the Empire to lure the espers out of hiding, and he swiftly killed them. Sensing this, more espers forced open the Sealed Gate and rushed to confront Kefka, but were killed. In their wake the Sealed Gate remained open and vulnerable, allowing Gestahl to enter their realm again.

Gestahl and Kefka find the Warring Triad in the Esper World and raise the entire island the mountains are on, creating the Floating Continent.

The fate of the Esper World at this time is unknown, though certainly the Sealed Gate is destroyed. With the destruction of Kefka and the Warring Triad at the end of the game, magic vanishes from the world, so it is likely the Esper World and any surviving espers vanish as well.

Upon returning to Zozo upon completing the Magitek Research Facility, the player witnesses a flashback of the Esper World. For this sequence they control Terra's father Maduin. The menu cannot be opened and there are no treasures to find or enemies to fight.

After another cutscene, Maduin will be in the Elder's house, speak to him and he will leave. Speak to the esper guarding the door for a cutscene where Madeline flees. Run to the gate (the Elder outside can be ignored) and enter it, after the short scene with the Imperial soldiers, run forward and speak to Madeline. After another cutscene the flashback ends. 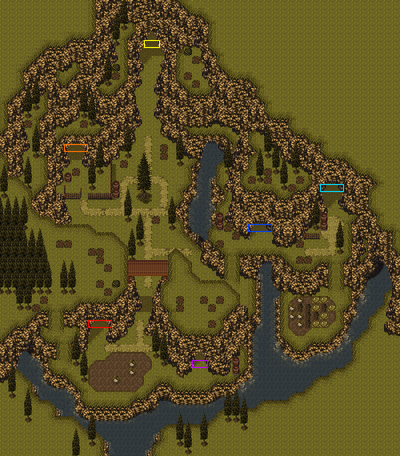 "Another World of Beasts"

The music for Esper Land is called "Esper World," also sometimes referred to as "Another World of Beasts." This music is also used during somber moments in the game.

Within the game's code, the Esper World location has the location tag "Esperville" (幻獣の村, Genjū no Mura?, lit. Phantom Beast Village). The area where the espers live is called Esperville. Since the place cannot be entered properly, the tag never appears in-game. Esperville is also used within the Final Fantasy III Nintendo Player's Guide for the name of this area.[1]

The Sealed Gate to the Esper World (GBA). 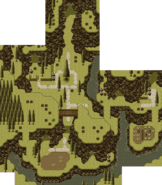