The Esper Caves, also known as Espers' Gathering Place, is a location in Final Fantasy VI, located to the west of Thamasa. It only becomes accessible after the party has rescued Relm from the Burning Home in Thamasa; if the party tries to visit earlier, the cave entrance is nowhere to be seen on the world map. The surrounding mountains are abundant with magical energy and it is considered a sacred place to the espers.

Terra, Locke and Strago come to the Esper Caves to look for the espers that escaped the sealed gate and attacked Vector. They are followed by Strago's granddaughter Relm, who had demanded to come and was refused. At the pinnacle of the mountain the three find a small shrine with three golden statues, which Strago identifies as the Warring Triad, the gods of magic. The three agree the espers are likely nearby.

As the three leave the shrine they are attacked by Ultros, who wants to steal them to impress Siegfried. Relm makes her presence known, and using her special talent to sketch a living portrait of Ultros, he is frightened off. Impressed, Terra and Locke agree to let her accompany them.

The group continues to explore the caves and eventually finds a group of espers. While the two are initially hostile to each other, the espers' leader Yura calls them off when he senses Terra's esper heritage. The party convinces the espers to return to Thamasa to negotiate peace with General Leo Cristophe, and they depart.

The esper caves no longer exist in the World of Ruin, through there are two small spots of land north-west of Thamasa that could be the remains of the sunken mountains.

The party's third encounter with Ultros.

When coming to the mountains, the objective is to find the espers. The path through the mountain is linear, with the exception of cave exits in the first area that loop around. Throughout the dungeon the player can witness Relm following the party, but her presence has no impact on the party's actions (if the player is quick enough, it is actually possible to catch Relm and walk through her sprite).

Follow the path through the mountain to the shrine with the statues of the Warring Triad. After the cutscene, the statues can be inspected for an inscribed legend of the trio. When the party steps down the stairs they will be thrust into a battle with Ultros. When Ultros has taken enough damage, a cutscene will play and Relm will join the party in the battle in-progress, use her Sketch skill on Ultros to immediately end in the battle.

In the area beyond the shrine is a save point and three spots of ground that are pitfalls and drop the party into another part of the cave when stepped on (these pitfalls will not trigger until the party has fought Ultros and recruited Relm). The upper-left and right pitfalls drop the party onto bridges that lead to treasure, and the party can jump down to the main area of the cave from the collapsed sections of bridge. Drop down the lower-left pitfall and follow the path to a cave where an esper is visible, approach them to initiate a cutscene and complete the dungeon. 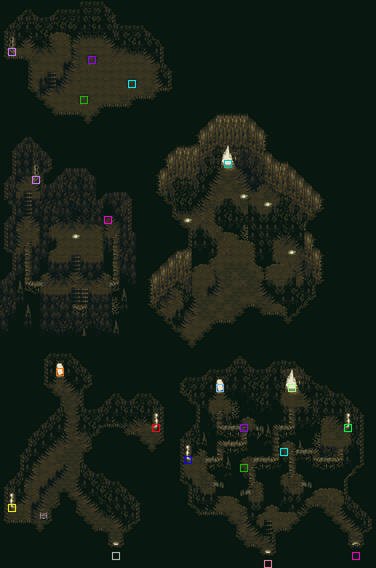 "Mt. Koltz" is the background theme for the Esper Caves.

The Esper Caves (幻獣の洞窟, Genjū no Dōkutsu?, lit. Phantom Beast Caves) are the setting for a regular dungeon and are also featured in the Challenge Event Legendary Plunder.

The party makes their way to the Esper Caves in an attempt to persuade the espers to reconcile with the Empire. Meanwhile, Emperor Gestahl advances through the Cave to the Sealed Gate...

Unused sprites of Ultros and Relm exist on the exterior of the caves, in the area immediately before the party finds the espers. Presumably, they were intended to be used as a failsafe to trigger an encounter with Ultros and Relm's recruitment in this area if the party came here without triggering the battle at the statues. However, as the pitfalls that drop the party into this area do not trigger until Relm has been recruited, doing this is impossible. 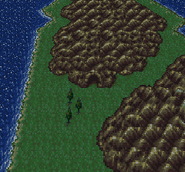 The Esper Caves on the World Map (SNES).

The Esper Caves on the World Map (GBA).

Inside the Esper Caves (GBA).