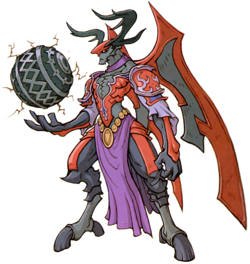 From the world view, the Espers of Revenant Wings are born of a different power than those of Final Fantasy XII.

The Espers, called Yarhi by the aegyl, are the summoned monsters in Final Fantasy XII: Revenant Wings. Espers are distinct from those of the other summons in Ivalice games; unlike the Scions or the Espers of Final Fantasy Tactics, Espers in Revenant Wings are unique to Lemurés and have their distinct history.

For unknown reasons Yarhi still resemble the standard Espers of Ivalice and this similarity to Ivalice summon magick leads to outsiders referring to them as "Espers". There are a total of 51 Espers.

The Espers of Lemurés are, unlike those of Ivalice, born from the stolen anima of the aegyl through the use of auracite. These stolen aegyl souls gathered, creating their own plane, the World of Illusion, and it is from here they can be called to the material world via a Summoning Gate by a person carrying auracite. In doing so the summoner's anima is eroded, creating more Espers.

The Espers from Final Fantasy XII are also present, attracted to Lemurés due to all the activity going on.

Vaan and his sky pirating friends at first try to protect the auracites from harm, but come to learn of them sapping the aegyl of their anima. After all the auraliths are destroyed, Vaan and his friends are transported to the World of Illusions where they learn more about the nature of anima and the Espers. The group fights the aegyl god Feolthanos who has been draining the aegyl of their anima and who wants to attack Ivalice. After Feolthanos and the auraliths are gone, the aegyls' anima is released and the Espers and their world fade from existence.

Espers are bought on the Ring of Pacts. There are four main elements, plus two additional areas for summons. Each element, bar Holy, has melee, ranged, and flying summons. Each area has three ranks, with rank 1 being the weakest and rank 3 being the strongest.

Is it recommended to check the in-game description of the Espers' attacks: they don't always use their elements.

Non-elemental summons have no weakness or resistance. They are best used for fighting a group of enemies with different weaknesses. The most powerful summons are non-elemental.

Earth summons are weak against fire summons. They are strong against thunder summons.

Holy summons have no offensive capabilities. Instead, they can only heal party members with their attacks. The sole exception is Ultima's special attack, Eschaton.

[view · edit · purge]Yari is Japanese for "spear". Spear is the typical weapon of the aegyl, alluding to the Yarhi being the blade of the aegyl.