Espada is an enemy in Final Fantasy X bred in the Monster Arena by catching at least one of each fiend in Macalania. Unlocking it will net 60 Shining Gems. It shares its model with the Epaaj, Machea, and Klikk.

Espada has Auto-Regen. It uses attacks Hades Claw, which causes Instant Death and Poison, and will counter with it when targeted, attacking a random party member. After using it four times, it will use Blade Shower. Espada and Neslug are the only arena creations immune to Doom.

Like most Area Conquest monsters, Espada is easy if the player has the Celestial Weapons. Having Deathproof armor is useful for Espada's an instant-death counterattack. Otherwise, it is recommended to use armor with Auto-Haste and Auto-Phoenix to cut down on the number of turns lost reviving downed members and re-casting Haste. Espada has no resistance to Armor Break, and only has a 50% resistance to Slow. 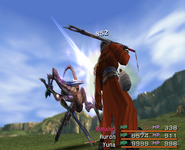 Blade Shower.
Add a photo to this gallery

[view · edit · purge]Espada is Spanish and Portuguese for "sword". This refers to the blades on its limbs.

Retrieved from "https://finalfantasy.fandom.com/wiki/Espada?oldid=3369011"
Community content is available under CC-BY-SA unless otherwise noted.