Escape (エスケプ, Esukepu?) is a recurring ability in the series.

Escape (also called Choco) is a summon which can be used by the Summoner and Evoker classes. It summons Chocobo which will randomly use one of three attacks; Chocobo Dash, Chocobo Kick? or Chocobo Kick. It can be bought from Replito or Doga's Village for 100 gil.

Escape, a spell from the Exit Materia, has the same effect as Teleport, which enables parties to flee from battles, at the cost of 16 MP. If used during Battle Square battles, the player can keep their accumulated BP, which they are unable to do when escaping from Battle Square with the regular Escape command.

Escape transports party members within area of effect out of a dungeon. Players are always teleported to a specific location, regardless of which entrance to the dungeon they used. 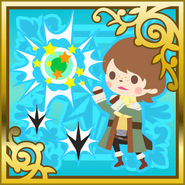 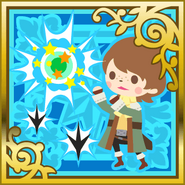