Erase (イレース, Ireesu?) is a recurring ability in the series. It is similar to Dispel in that it removes beneficial statuses from targets.

Erase is a level 5 Black Magic spell that can be bought for 5,000 gil at Northeast Saronia and Doga's Village. It removes all beneficial status effects on the target. The Scholar's main ability, Study, dispels the target's positive status along with scanning their stats, HP and weaknesses. Erase can be used by the Black Mage, Sage, and Magus classes.

In the NES version, the spell was meant to remove only the Reflect status, but does not do so. It would have had a 60% accuracy.

Erase is distinct from Dispel, as it removes one detrimental magical effect from the target. Erase is considered Enhancing Magic, and can only be cast on party members. When combined with Divine Veil or Accession, this spell gives Erase to all party members within a small radius of the target. It takes 2.5 seconds to cast and can be recast every 15 seconds. Scholars are only able to use this spell under the effects of Addendum: White or Enlightenment, or with a White Mage subjob of level 32 or higher.

Erase is a Black Magic spell removes enemy's own Defense spells. It cost 24 MP to use, and it can be bought for 5500 GP in Floatland Town (Floatland) and Muu (Future).

Erase is an ability that can be chosen in the Onion Knight's Sage EX Burst, although it does nothing when selected. 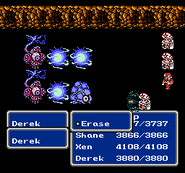 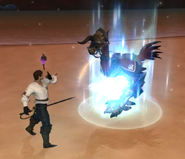