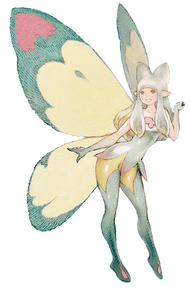 Eos (エオス, Eosu?) is a faerie summoned by the Scholar job in Final Fantasy XIV obtained from the scholar job quest "Forgotten But Not Gone." She is summoned with the Summon command. Eos's primary focus is healing magic.

As of the Final Fantasy XIV: Shadowbringers expansion, Eos and Selene have the same skills. Eos is now summoned with the Summon Eos command. Transforms into Seraph through the Summon Seraph command.

The following abilities have been removed. The given statistics represent their last form before their removal.

Render of Eos with a Scholar.

[view · edit · purge]In Greek mythology, Eos is a Titaness and the goddess of the dawn.