Enwater (エンウォータ, Enwōta?) is a recurring spell in the series. It usually gives the Enwater status, either adding a set amount of additional Water-elemental damage, or the elemental status, to a target's attack.

Enwater is an Enhancing Magic white magic spell. When under the effect of Enwater, the user will deal slight Water magic damage following each melee attack. Ordinary melee attacks cannot have a specific element, and Enspells do not change this.

For example, a player attacks the Eft for 30 damage, the Eft takes 12 additional water damage.

Enwater is a spell available to the Synergist role, accessible by Sazh (stage 4), Lightning (stage 7), and Hope (stage 7). It adds the water attribute to the target's Commando, Ravager, Sentinel, or Saboteur attacks. It costs 2 ATB and has a base duration of 180 seconds.

Enwater is available to monsters—specifically, Sahagin—but not to players at present. It gives the target additional water-element damage on their physical attacks.

Enchants all allies' attacks with the power of water.

Enwater is the level 14 ability of the Magus class, requiring 340 AP to learn. At the cost of 18 MP, the user will make the party's physical attacks Water-elemental. 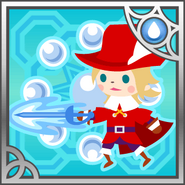 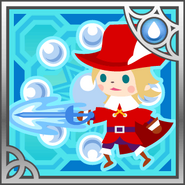