Tetsuya Nomura
Enuo is a historical figure in Final Fantasy V. He was an immortal and evil warlock from a thousand years before Final Fantasy V, who sacrificed his immortality for the power to control the Void. After a long battle, Enuo was eventually defeated, but the Void he had created could not be erased. As such, a thousand years later, Exdeath sought the power that Enuo had once possessed.

Enuo appears as a superboss in the Sealed Temple in some versions of the game, introduced in Final Fantasy V Advance. The scepter Enuo wields is called Enuo's Scourge, and has appeared as a weapon related to Exdeath since Dissidia Final Fantasy.

One thousand years before Final Fantasy V, the immortal wizard Enuo traded his immortality for the power of the Void. He attempted to use its power to take over Planet R, beginning a long battle with the people of the world. Warriors wielding the twelve legendary weapons were able to defeat him, and the Void engulfed him.[1][2] Enuo ended up in a timeless place, the ending point of both light and darkness, reachable only by the device known as the Sealed Temple.[3]

Because the Void he had created could not be erased, the crystals were divided in two with Planet R also split to maintain balance, and the Void was sealed in the Interdimensional Rift between the two worlds.[1][2]

In the years since, knowledge of Enuo faded. Enuo and the twelve legendary weapons used to defeat him were documented in the Sealed Tome, but the book was illegible as half of its pages were in the Library of the Ancients on Bartz's world and the other half were in the libraries of Surgate Castle on Galuf's world.[4] Sage Ghido was aware of some of the legends about Enuo, but was unsure if they were true.[2] Exdeath knew of Enuo's defeat and viewed it as a cautionary tale, sending the demons of the Rift to stop the Light Warriors from obtaining the legendary weapons once used to defeat Enuo.[5] When the Phantom Village returned as a result of Exdeath merging the worlds, the villagers knew of Enuo's history as their village had been frozen in time ever since the world was split.[1]

When the Light Warriors traveled to the Sealed Temple, a device that transported to other dimensions, they encountered Enuo in his timeless demesne. Enuo told them that nothing awaited them there, as the place had no past, present, or future, before demonstrating the power of the Void by fighting them. The Light Warriors prevailed and defeated him.[3]

Enuo is a purple-skinned humanoid with lavender tentacles wrapped around his torso. His helmet has two large red horns as well as couple smaller, dark and gold-tipped horns alongside them. He wears spiky jewel-encrusted shoulder guards and multicolored robes in orange, red, white, lavender, and purple with golden saw-tooth shape trim at the hem. He has wrapped a chain of beads holding up partial skeletons around his waist, consisting of two skulls and ribcages. He is muscular and has white eyes and red claws. He wields a scepter with ghastly faces at the base of the prongs.

I see you've begun to understand my glorious existence here. Yet, perhaps it is best you see for yourselves my power... Power that held the whole world in fear... The power of the Void!

Enuo is described as the "strongest evil".[2] His lust for power led him to trade his immortality for the power of the Void. Like Exdeath, his motivation is only ever stated to be to "make the world his",[1] suggesting he sought power for its own sake. In his megalomania he wreaked havoc all over the world, to the extent that the people were willing to split the world in two to prevent anyone obtaining that power again.[2]

In the Sealed Temple, Enuo seems to enjoy his existence in a timeless realm, describing his domain there as "beautiful darkness" and the "stillness of eternity".[3]

Due to possessing the power of the Void, it is likely that Enuo possessed Exdeath's ability to effortlessly engulf entire settlements. Beyond this, it is unclear if Enuo's power exceeded Exdeath's. Though Enuo was said to have been defeated with the twelve legendary weapons,[2] he was also said to have lost when he was engulfed by the Void;[1] conversely, the Light Warriors used the same twelve legendary weapons a thousand years later to destroy Exdeath. However, those Light Warriors wielding the same weapons appeared to destroy Enuo in the Sealed Temple,[3] although in gameplay, Enuo is a more challenging boss battle than Neo Exdeath, both possessing similar abilities.

Enuo is fought at the bottom of the Sealed Temple. The battle uses the same background and music as the battle with Neo Exdeath, and both possess similar abilities.

In versions of the game without the Sealed Temple, Enuo is only mentioned. 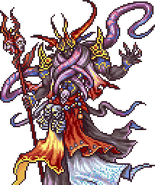 In earlier story drafts, Enuo played a more prominent role, being an incarnation of evil who controlled the power of nothingness and sought to destroy the world. The legendary warriors eventually sealed him away in another dimension. During the events of the game, Exdeath would destroy the crystals to open the path to resurrect Enuo. During the finale, Enuo would be revived and Exdeath would transform into a branch to enter his body, becoming Neo Exdeath.[6]

When it was decided that Enuo would appear in the Advance version, Tetsuya Nomura, who was responsible for monster designs for Final Fantasy V, was brought back to design Enuo's appearance. Enuo's appearance combines design elements of Exdeath's base and final boss forms.[7]

[view · edit · purge]エヌオー (Enu Ō?) is the transliteration of the English letters "N" and "O" into Japanese.