It is said the blackened blood that coats this demon shield belonged to its former owners.

Ensanguined Shield (ちぬられたたて or 血塗られた盾, Chi nurareta Tate?), also known as Hematic Shield, Blood Shield, Bloody Shield, Cursed Shield, or Sanguine Shield, is a recurring shield in the series. It is often a powerful shield, but generally comes with a downside to it.

The Hematic Shield is a dummied shield that would have provided +15 Defense, +1 Evasion, +5 Magic Defense, +10 Magic Evasion, and +5 Weight, with the downside of never evading an attack. The shield, along with Bone Mail, Thornlet, and the Cursed Ring, has the annoyance of being equipped all the time when using the Optimize command, if the player has it in their inventory.

The Cursed Shield is found in Narshe in the World of Ruin, received from one of the surviving townsfolk in a locked building. It has a penalty of -7 to Magic, Speed, Stamina, and Strength, is weak to Fire, Ice, Lightning, Poison, Earth, and Water, and inflicts Confuse, Berserk, Silence, Seizure, and Doom upon the wearer. This armor is ignored by the Optimize option in the equipment menu.

However, after being equipped for 256 battles with the user remaining alive at the battle's end, the Cursed Shield is uncursed and becomes the Paladin's Shield, the most powerful shield.

In the original version, Ensanguined Shield is the strongest shield, beating even the Zodiac Escutcheon in terms of defense. It provides +90 Evasion, almost double the boost given by the second-strongest shield but inflicts Poison, Sap, and Slow on the wielder. It can be found as a treasure in the Henne Mines, the Feywood, and Balfonheim Port, and requires 90 LP and the Ensanguined Shield license to equip.

In the Zodiac versions, Ensanguined Shield now requires the Ensanguined Shield license for 100 LP. It can be found as a treasure in the Necrohol of Nabudis (Cloister of the Highborn), is obtained from the Hunt Club sidequest, and is a rare steal from Disma in Stage 88 of the Trial Mode. It can be equipped by the Red Battlemage, Knight, and Foebreaker.

The Ensanguined Shield is the second-strongest shield, being bested by the Reverie Shield, and provides +15 Evasion as well as absorption of the Dark element, but makes the wielder weak to the Fire element. However, equipping it causes the member equipped with it to gain more health from White Flame. It can be obtained through the Bazaar through the Cursed Armor A category.

A large, demon-faced shield found in a fortress of a clan that suffered a bitter end after being betrayed. The blood and malice of the clan has sunk in deep and cannot be washed away. It dramatically raises Defense, but in exchange, it markedly lowers Evasion.

Bloody Shield is a shield that provides 45 P.DEF, 23 M.DEF, and -100 Evade. It can be bought as part of the Norende reconstruction from the Adventurer for 5000 pg.

A large, demon-faced shield found in a fortress of a clan that suffered a bitter end after being betrayed. It has been irreparably stained by their blood and malice. Only a hero of light, pure of mind and spirit, can dispel the evil that dwells within the shield.

Bloody Shield is a shield that provides 47 P.DEF, 24 M.DEF, and -100 EVD. It can be stolen from Geist (ch 5) and found in a post-game treasure chest (ch 6). After being equipped for 255 non-consecutive battles per shield the Bloody Shield is uncursed and becomes the Hero's Shield.

The Ensanguined Shield is a level 90 shield that provides +73 Defense, but also has Initial HP -95% and Initial Bravery -100%. It can be obtained from the shop by trading 31,920 gil, Taurus Recipe, Wyvern Egg, and Snowboard.

The Ensanguined Shield is a level 100 shield that provides +73 Defense, Initial HP -95% and Initial Bravery -100%. It can be obtained from the shop by trading 180,320 gil, Taurus Recipe, Wyvern Egg, and Snowboard.

Ensanguined Shield is a pavis that provides +24 P-Defense, +14 M-Defense, and adds zero to parry stats. It causes the bearer to consume AP at a faster rate, and reduces resistance to all elements and to all status ailments.

Final Fantasy VI, the curse on the Cursed Shield is dispelled. 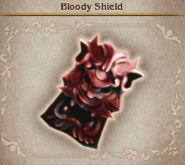 Armor
Retrieved from "https://finalfantasy.fandom.com/wiki/Ensanguined_Shield?oldid=3277041"
Community content is available under CC-BY-SA unless otherwise noted.