Final Fantasy Wiki
Register
Don't have an account?
Sign In
Advertisement
in: Characters in World of Final Fantasy, Deities

Cid Pollendina: Oh, shut up and help me remodel the Enna Kros page!
Please expand this article into a full one. The following tasks need to be completed:This request can be discussed on the associated discussion page. Remove this notice upon completion.

Cassandra Lee Morris
Enna Kros is a major non-player character in World of Final Fantasy. She encourages Lann and Reynn to travel through Grymoire to discover the forgotten memories of their past.

Enna has long silver hair and dark blue eyes. She wears a long white coat with the sleeves rolled up with a black vest underneath. She has a pink ruffled ascot with a sky blue gem in the center and white gloves. She has pale olive green capris and mid-shin black boots.

Supposed Age: 24 (And never a day older, says she)

Notes: Surprisingly casual / Seems kind of hands-off / Old friend of Tama and Serafie / Sincere, and never known to lie / Drops dire truths with a smile, making it hard to tell when to be worried

She's God
No, really, she is. While some regard her as a funny lady with a divinity complex, she is in fact the real actual creator of Grymoire and other "Realms of Fantasy." She calls the shots and makes the rules, although she (usually) prefers not to interfere once they're in place.

Basically gods never make mistakes, and so if humanity is a divine creation, then all possible deeds of humankind must fall within divine parameters and therefore be error-free, right? And since humanity is error-free, why should god have to work? Her nine-to-five shift ended when she created people. Such are the reckless musings of Enna Kros, Lazy God.

The Realms of Fantasy
When building her worlds, Enna Kros took glimpses at many other worlds outside her dominion, cherry-picked the elements she liked, and integrated these "figments" into her creations. Her Champion System derives from this mechanic.

Since before using the power of fantasy to create worlds, Enna Kros has maintained a close friendship with The Girl Who Forgot Her Name, whom she found by chance at the source of that power.

The Champion System
At the core of Enna Kros's fantasy worlds lies a crystal, which The Girl Who Forgot Her Name refers to as the Deus Crystal. Conceived by dreams, the crystal can take flights of fancy to distant worlds that have no logical connection to its own. Enna Kros (better known as Alexander) sifts through the figments the crystal finds in search of souls with the potential to protect her worlds from threats like the Exnine Knights and the Cogna. She then shapes these souls into Crystal Cubes, which become a descendible, self-sufficient system of antibodies that activates when her universe is threatened from the outside.

Alexander as Enna Kros
The woman "Enna Kros" is not the god Alexander's true divine form, but rather that of a soldier named Roksanne who existed prior to the creation of the Realms of Fantasy. Alexander was fond of Roksanne's spirit and chose to merge with her soul rather than absorb it. (Incidentally, Roksanne once summoned Tama and had a pact with her.)

Of course, a god's mind is vast and requires many faces. While life as Roksanne provides much enjoyment, Alexander also frequently appears as a male: a fierce young man named Aris. (This young man was once Serafie's master.) So you see, outside of Grymoire, depending on which A-World you pay a visit to, you might find that god has more forms than one.

Enna Kros appeared one day as a customer in Nine Bean Coffee where Lann and Reynn worked, and introduced them to Tama and reminded them of their origins. She is a "God" who created the world of Grymoire.

Enna Kros narrates the title of each chapter in the game.

Despite not willing to intervene in the affairs of Grymoire, Enna Kros subtly helps Lann and Reynn in World of Final Fantasy through several means such as providing tips through the Tip Jar, providing single empty prisms for Mirages the player has not yet encountered, and allowing the player to view information of Mirages recorded in her Mirage Manual. Enna Kros also places special glowing symbols of different kinds in Grymoire that can be interacted with to help the twins travel through areas.

Once the player completes every intervention quest and defeats the final boss, Enna Kros also provides copies of the twins (as prismariums) to Hauyn, so the player can play the post-game with them.

In the Maxima version, Enna Kros (heavily implied from the Rumor Radar) also provides the player access to the final bonus dungeon, the Hidden Dungeon, as well as a Gate leading to a boss fight with a much enhanced version of both phases of the final boss.

In the Maxima version, Enna Kros can be fought as a superboss after clearing the Postscript, alongside Tama and Serafie. She is found in Nine Bean Coffee and can be challenged to battle.

Enna Kros will only utter these quotes after Lann and Reynn have just returned from Wellspring Woods in Chapter 1, but before entering North Promenade.

Look after Tama for me. Or then again, maybe you should just let her look after you.

Some like to say, "Where there's life, there's hope." But that's just a saying.

Icon for Interference With the World.

Icon for Power of A.

Interference With the World. 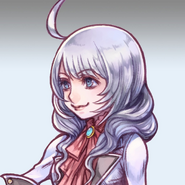 In Lilikin form, seen in the "World Parade" ending. 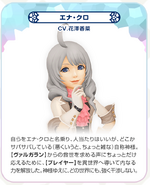 Enna Kros is an anagram for "Roksanne", Enna Kros's actual name mentioned on her Who's Who entry, and several WOFF Apocrypha excerpts.

[view · edit · purge]Roksanne is derived from the Greek name Rhōxanē (Latinised to Roxana), used for Roxana, the wife of Alexander the Great, a derivative of the Persian Roshanak, meaning bright star and in Kurdish (Roj-an) as well as in Avesta (Rowc) it means "bright, sun, sunlight, sun god, day".