The Enlightened Races are group of races in Final Fantasy XI who are inhabitants in Vana'diel, and are said to have descended from the Goddess Altana. These include the playable Hume, Elvaan, Tarutaru, Mithra, and Galkan races. The Enlightened Races are currently at war with the Beastmen who are said to be descended from the God of Twilight, Promathia.

In Vana'diel lore, it is told that after the ancients were smote for attempting to enter paradise through The Gate of the Gods, the Goddess Altana wept five divine tears for her lost civilization. When the tears touched the soil of Vana'diel they gave life to five Enlightened Races. However Promathia, God of Twilight, witnessed this from the shadows and condemned each race by bringing forth their darkest attribute, the apathy of the Humes, the arrogance of the Elvaan, the rage of the Galka, the envy of the Mithra, and the cowardice of the Tarutaru. With these dark aspects the races would forever argue amongst themselves, keeping their minds occupied and away from The Gate of the Gods. The truth behind these legends is revealed throughout the games story.

The ancient extinct races of Zilart and Kuluu are sometimes grouped as Enlightened Races. 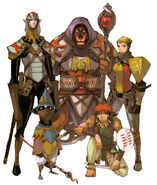