Gilgamesh's partner Enkidu often comes to his master's aid, healing him or offering other support, even across dimensions. His appearance may change, but whether he be man or dog, his loyalty never wavers.

Enkidu (エンキドゥ, Enkidu?), sometimes known as Enkido, is the recurring partner of Gilgamesh, appearing in various Final Fantasy titles. He has taken many different forms from a canine to a winged demon, but retains the same green color palette.

Enkidu is the name of one of the Abductor enemies in Final Fantasy V that fights alongside Gilgamesh in a battle against him.

Enkidu appears only in the Advance port, as one of four possible attacks when Gilgamesh is summoned. It deals the most damage out of the four attacks, having a Spell Power of 200 and ignores target's defense. After all three swords have dropped onto the battlefield, and if Gilgamesh uses this attack, all three swords will glow in their associated colors before Enkidu attacks the enemy party. Enkidu has the same sprite that he had in Final Fantasy V.

Although Enkidu is never actually seen in Final Fantasy IX, there is a message left for Gilgamesh regarding Excalibur II and Excalipur in Memoria by someone named Enkido, which is presumably a misspelling or mistranslation of Enkidu's name. The message is as follows:

Enkidu is a member of the Golem genus found on the floating island of Tu'Lia. This is the only instance where Enkidu is not in some way related to Gilgamesh.

Enkidu appears as a dog-like pet of Gilgamesh, who appears as an Elite Mark. He is fought in both battles against him.

Enkidus are the names of the Rock Wolves Gilgamesh calls to his side at the Gates of Shattered Time.

A chicken named Enkidu is introduced with Gilgamesh in the second part of the Inspector Hildibrand series of sidequests, added in patch 2.2. Gilgamesh reveals that this isn't the true Enkidu, but simply a chicken he painted green to remind him of of his former companion out of loneliness. Later, when the party fights Gilgamesh for the first time, several green chickens roam the battlefield and will chase any players that Gilgamesh transforms into toads, causing minor damage. Enkidu and Gilgamesh flee the battlefield upon defeat by jumping off the bridge at Griffin Crossing in Ishgard. 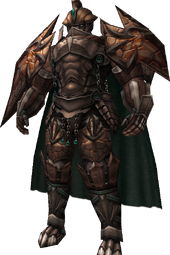 The first Enkidu to accompany Gilgamesh. Enkidu is Gilgamesh's companion the two having known each other since their youth. Enkidu serves as a guide and a royal adviser for Gilgamesh, who is the King of Genbu and the Lorican Alliance.

According to Crimson Codex Enkidu was almost banished from his homeland as the result of his daughter having become pregnant with Ryid Uruk, but Gilgamesh detained him and made him his advisor. Enkidu died in 832 at the age of 58, protecting Gilgamesh during a coup d'état. After being banished to the rift, it's heavily implied that Gilgamesh began acquiring "faithful sidekicks" that he'd name Enkidu per world to keep the memory of his childhood friend alive in a form he could always fight beside.

Enkidu returns with his original appearance as a boss monster in Theatrhythm Final Fantasy. He is often fought during Battle on the big bridge, although he can appear at random in other Battle Music Sequences (BMS).

Enkidu appears as a human character in "The Wolf that Fell in Love", a guard with a golden armor who lives in Barnad. It is unknown if he helps Gilgamesh in this game due to the missing translations. He seems like a friend of Volg though.

He is fought exactly two times in the story: the first being in earlier pages and the last, almost near the end.

When Gilgamesh forces Princess Irma to marry him and Volg and Chocobo interfere in the ceremony, as the room is set on fire, Enkidu appears but is crushed by a boulder that had fallen from the ceiling. When Gilgamesh is fought, Volg proclaims that he wouldn't let Enkidu's death in vain (or so is believed).

The gods later strike him with a fatal disease for killing Humbaba and the Bull of Heaven. He first curses Shamhat for bringing him to civilization but then blesses her when he is reminded that she caused him to meet Gilgamesh. Enkidu's death fills Gilgamesh with violent grief and an incredible fear of death. Gilgamesh spends the rest of the poem searching for immortality, but his repeated failures force him to accept that death is part of living.