Gilgamesh's partner Enkidu often comes to his master's aid, healing him or offering other support, even across dimensions. His appearance may change, but whether he be man or dog, his loyalty never wavers.

Enkidu (エンキドゥ, Enkidu?), sometimes known as Enkido, is the recurring partner of Gilgamesh, appearing in various Final Fantasy titles. He has taken many different forms from a canine to a winged demon, but retains the same green color palette.

Enkidu is one of the Abductor enemies that fights alongside Gilgamesh in a battle against him.

Enkidu appears in the GBA port and succeeding versions, as one of four possible attacks when Gilgamesh is summoned. It deals the most damage out of the four attacks, having a Spell Power of 200 and ignoring target's defense. After all three swords have dropped onto the battlefield, and if Gilgamesh uses this attack, all swords will glow in their associated colors before Enkidu attacks the enemy party. Enkidu has the same sprite that he had in Final Fantasy V.

Although Enkidu is never seen, there is a message left for Gilgamesh regarding the Excalibur II and the Excalipur in Memoria by someone named Enkido:

Enkidu is a member of the Golem genus found on the floating island of Tu'Lia. This is the only instance where Enkidu is not in some way related to Gilgamesh.

Enkidu is a dog-like pet of Gilgamesh, who appears as an Elite Mark. He is fought in both battles against him.

Enkidus are the names of the Rock Wolves Gilgamesh calls to his side at the Gates of Shattered Time.

A chicken named Enkidu is introduced with Gilgamesh in the second part of the Inspector Hildibrand series of sidequests, added in patch 2.2. Gilgamesh reveals that this isn't the true Enkidu, but simply a rooster he painted green to remind him of his former companion out of loneliness. When the party fights Gilgamesh for the first time, several green chickens roam the battlefield and chase any players that Gilgamesh transforms into toads, causing minor damage. Enkidu and Gilgamesh flee upon defeat by jumping off the bridge at Griffin Crossing in Ishgard.

What looks to be the "real" Enkidu appears as a boss in the Hildibrand sidequests for patch 2.5, resembling the original design from Final Fantasy V, though now referred to as female. She is inadvertently summoned to Eorzea in the same manner as a primal when Gilgamesh prays to be reunited with her while in the vicinity of numerous Fire Crystals. She fights alongside Gilgamesh in the instanced trial "Battle in the Big Keep", but is defeated by the Warrior of Light. Once the pair is defeated, it is possible for the player to receive the rooster version of Enkidu as a minion. 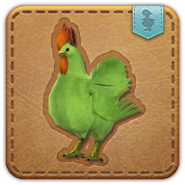 Enkidu is a boss in Final Fantasy XV: Episode Gladiolus DLC. It is a winged monster fought on a bridge. If the player successfully parries and counterattacks, they can ride on top of it.

According to the Final Fantasy XV: Episode Carbuncle Comic 13, one theory for the origin of the Shield of the King's bird tattoo is to honor Enkidu, a close companion of Gilgamesh, the first Shield of the King.[1] Verstael Besithia once sent a team to explore the Taelpar Crag where they came across Enkidu, defending the gorge from outsiders.

Enkidu is Gilgamesh Ashur's companion. The two having known each other since their youth. Enkidu serves as a guide and a royal adviser for Gilgamesh, who is the king of the Lorican Alliance. Enkidu is 240 cm tall.

According to Rubicus, Enkidu was almost banished from his homeland as the result of his daughter having become pregnant with Ryid Uruk, but Gilgamesh detained him and made him his adviser. Enkidu died in 832 at the age of 58, protecting Gilgamesh during a coup d'état.

Final Fantasy Type-0 is the only installment that acknowledges Gilgamesh's childhood. Some fans believe that after being banished to the rift, Gilgamesh began acquiring "faithful sidekicks" that he'd name Enkidu in memory of his childhood friend.

In Final Fantasy Awakening where he is playable alongside Gilgamesh, Enkidu fights with knuckles similar to Eight. Unlike Eight, Enkidu focuses more on punches and uppercuts, similar to a boxing fighting style, and brute force where he quickly tackles his opponent as part of his special skill. The player may struggle to defeat him due to his higher defense, endurance and durability. Like Jack, his strongest skill unleashes projectiles in his chest while in mid-air to damage all enemies, but also drains his enemies' HP and appears stronger in terms of draining the opponents' health. He is immune to freezing when either a mage or Caetuna hit him with freeze magic. Enkidu can be used in later chapters, and is an enemy during Enemy Invasion and the Samsara Realm.

In the Augite System, Enkidu has his other form, Stars. It shows a scene where Enkidu beats his enemies to see the Azure Dragon Crystal, which transforms him and demonstrates his powers.

Enkidu returns with his original appearance as a boss monster. He is often fought during "Battle at the Big Bridge", although he can appear at random in other Battle Music Sequences (BMS).

Enkidu appears as an enemy in Battle Music Sequences.

Enkidu is a human character in "The Wolf that Fell in Love", a guard with a golden armor who lives in Barnad. It is unknown if he helps Gilgamesh due to the missing translations. He seems like a friend of Volg.

He is fought twice: the first being in earlier pages and the last, almost near the end.

When Gilgamesh forces Princess Irma to marry him and Volg and Chocobo interfere in the ceremony, as the room is set on fire, Enkidu appears but is crushed by a boulder that had fallen from the ceiling. When Gilgamesh is fought, Volg proclaims that he wouldn't let Enkidu's death in vain.

The gods later strike him with a fatal disease for killing Humbaba and the Bull of Heaven. He first curses Shamhat for bringing him to civilization but then blesses her when he is reminded that she caused him to meet Gilgamesh. Enkidu's death fills Gilgamesh with violent grief and an incredible fear of death. Gilgamesh spends the rest of the poem searching for immortality, but his repeated failures force him to accept that death is part of living.