Enkelados is the weakest Rank II Mark from Final Fantasy XII. It is the tenth mark mentioned in the Clan Primer and becomes available after obtaining the Dawn Shard in the storyline. It can be found in The Shred area of the Ozmone Plain and is encountered after the player has killed all of the Wus in the area.

Hunt 10: The Defense of Ozmone Plain[]

Elder Species of Slaven, grown enormous over long years of Evolution. Portions of its Body have petrified even as it lives, becoming hard as Stone. the many Swords and Arrows lodged in its Hide much resemble those employed in ancient Warfare, testifying to the long, difficult Life led by this Creature. A group of garif curious to see a clan hunter firsthand petitioned for this Hunt.

The BradyGames guide to the original PlayStation 2 erroneously states Enkelados is weak to Water rather than Wind.

Ozmone Plain (The Shred)
Condition: Kill all Wu in the area

Ozmone Plain (The Shred)
Condition: Kill all Wu in the area

To have Enkelados spawn, one must defeat all of the Wu in the Shred, and then move one zone away, return, and Enkelados will have appeared.

Enkelados is one of the easier marks. It will eventually heal itself, taking its HP back up to 50%. It will use Purify once during the battle to heal any status ailments the player may have inflicted on it, followed by White Wind, which makes it immune to statuses for two minutes. Enkelados can be affected by Disable and Immobilize.

The Shred is also the place where the Rare Game Bull Croc will spawn, and it might spawn alongside the Enkelados. The Aeros, another Rare Game, will fly out of the Henne Mines if the Bull Croc is defeated. If the Bull Croc appears, it may be better to zone in and out until it disappears.

One strategy is to start the battle by summoning Belias and have him perform Hellfire for severe damage. Chaining Quickenings will also bring it down easily, or by bringing a berserked character. The Nihopalaoa-Remedy trick when Enkelados is at half-health will allow for an easy take-down.

The player will also receive an Errmonea Leaf after the battle, which Low-chief Sugumu asks the player to take to Lesina in the nomad village in Giza Plains during the Dry. If the player does this, Lesina will reward the player with two Remedies.

Enkelados appears as an enemy. 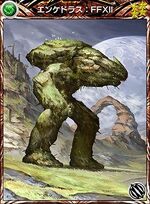 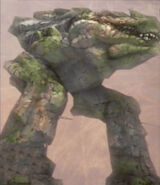 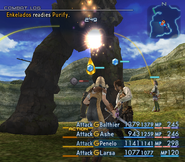 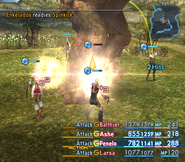 [view · edit · purge]In Greek mythology, Enceladus was one of the Giants, the children of Gaia. It is said that he had serpent-like lower limbs and dragon scales for feet.