The Enhancer (エンハンスソード, Enhansu Sōdo?, lit. Enhance Sword), also called the Enhancer Sword or Enhancing Sword, is a recurring weapon in the Final Fantasy series. It is usually connected to magic, enhancing the equipped character's magical abilities in some fashion.

As of Dissidia Final Fantasy series, Enhancer has become associated as Terra Branford's weapon of choice.

An unusual rapier infused with magic.

The Enhancer is a sword found in Whisperwind Cove in the Dawn of Souls version and all versions based on it. It has 28 Attack Power, 25 Accuracy, and increases Intelligence by 7, thereby boosting the damage dealt and hit points restored by magic.

The Enhancement Sword is a weapon found in the Lunarians' first Challenge Dungeon. It is one of Golbez's best weapons in the tale, before he gets the Defender.

The Enhancer is a sword found in Istory Falls. It has 97 Battle power and increases Magic by 3.

Sword that boosts its wielder's magic.

The Enhancer can be bought in South Figaro, Nikeah, and Kohlingen for 10,000 gil in the World of Ruin. Terra, Celes, and Edgar can natively equip it. It has an attack power of 143, increases Magic Evasion by 20, increases Magic by 7, and enables the Bushido and Runic commands (although Cyan cannot natively equip it). It gives the highest boost of any weapon; although other weapons give the same boost, none give more.

Enhancer is also a weapon thrown by the Amduscias, which deals heavy non-elemental damage and is a counter to Throw.

The Enhance Sword is a weapon for Cloud. It is found at Gaea's Cliff and can be bought in Junon (after the party has Highwind). It has 43 Battle power, increases Magic by 16, and has eight linked Materia slots. Although its Battle power is low for the point it is found, the only other weapon Cloud can equip with eight Materia slots is the Ultima Weapon, which has zero Materia growth, while the Enhance Sword has normal growth.

The Enhancing Sword is a high-level sword available for Red Mages, which enhances the damage of Enspell effects and has increased Attack and Accuracy under such effects.

The Enhancing Sword is a

Castrum Abania as a treasure, a drop from the boss Inferno, or a reward for completion of the duty.

The Enhancer sword is obtained from the optional Fociaugh Hollow Menace dungeon as part of the Menace Beneath Lucis sidequest undertaken in Chapter 15. It is in the last floor guarded by chandravarma, a golden giant-type enemy. It is a powerful one-handed sword, but falls behind the Vortex weapons added in the Adventurer from Another World collaboration quest.

While not appearing as an equippable weapon, the Enhance Sword appears as part of Terra's artwork.

The Enhancer is a level 71 sword that increases Attack by 49 and increases base Bravery by 30% at the start of a battle. It can be obtained by trading 22,510 gil, a Rune Blade, Stone of the Condemner x3, and Crimson Powder x4.

Enhancer is a level 60 sword that provides +54 Attack and +30% Initial Bravery. It can be obtained by trading 113,800 gil, Coral Sword, Gagazet Steel, and Champion's Desire x5.

The Enhancer is Terra's default weapon. Like all other characters' weapons, equipping it offers no advantages or disadvantages.

While not appearing as an equippable weapon, the Dissidia variant of the Enhance Sword appears as part of Terra's model.

Just equipping this enchanted blade is enough to make anyone feel like a caster.

A sword beloved by mystic knights for its ability to heighten the wielder's intelligence. The enhancer was made from materials that facilitate the flux of magic, precisely because many mystic knights tend to prefer this weapon. Its lightness compared to other swords also makes it easier to maneuver, though it is uncertain how much of this is due to the influence of the wielder. The enhancer has become quite popular amongst soldiers for its ease of use, and for the great amount of offensive power it exhibits as a sword.

Enhancer is obtained by completing the Trail "Intangir". It provides ATK +82 and MAG +23.

The Enhanced Sword appears as a sword within the Forsaken Dungeon. It provides 29 Weapon Atk, 8 Durability, +4 Defense, -2 Speed, and -1 Consumption Rate.

Terra's Enhancer appeared as part of the Final Fantasy collaboration. 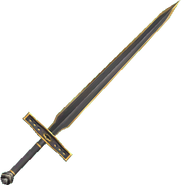 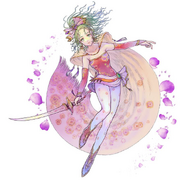 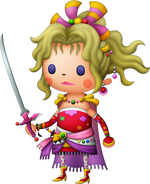 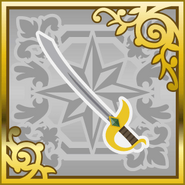 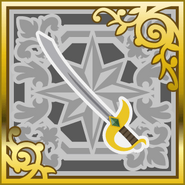 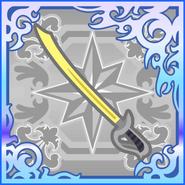 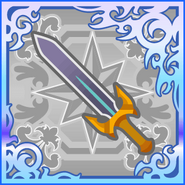 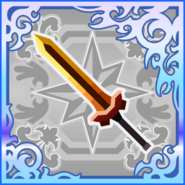 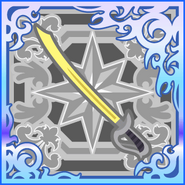 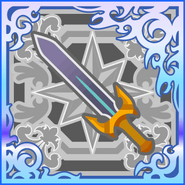 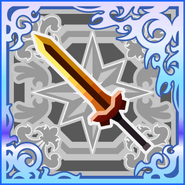