The Engine Blade (エンジンブレード, Enjin Burēdo?) is a recurring sword in the Final Fantasy series originating from Final Fantasy XV. It is the signature weapon of Noctis Lucis Caelum.

The Engine Blade is Noctis's default one-handed sword. He can use it to warp and it attacks fairly fast. Its description says the sword was a present to him from King Regis on Noctis's 16th birthday.

The Engine Blade is the first weapon that became associated with Noctis, ever since he was first announced for Final Fantasy Versus XIII. Noctis's character designer Tetsuya Nomura has noted that, despite having a limited amount of time to make the 2006 E3 trailer where the game was revealed, a good amount of time was spent designing the sword Noctis holds while sitting on his throne at the trailer's start.[1] In the trailer for Final Fantasy Versus XIII released at the "Square Enix 1st Production Department Premiere" in January 2011, Regis sits on his throne and talks to himself. He faces off against Iedolas Aldercapt and wields a falchion with an engine attached to its hilt.

The Engine Blade might be a weapon given to the crown princes of Lucis, as Regis wields it in A King's Tale: Final Fantasy XV.

The weapon was made sellable in patch 1.03 and sells for 1 gil. If the player sells it however, they cannot upgrade it. The player gains a new Engine Blade when using New Game Plus or chapter select.

Noctis wields the base version of the Engine Blade in Armiger Unleashed even if the player has upgraded it (or sold it). Though the Engine Blade is Noctis's "iconic" weapon, he doesn't usually use it in cut scenes, opting for the mandatory royal arms instead. He uses the Engine Blade in the cut scene where he tries to stop the Ixali summoning in the Adventurer from Another World, throwing it to warp.

The Engine Blade is obtained after obtaining 2,500 raid points in the Alexander raid event. It provides 210 attack and 180 magic to the user.

Noctis wields the Engine Blade as a playable character.

One Engine Blade was obtained automatically upon clearing Royal Hope Pt. 5. A longsword, it grants Noctis the Affinity ability "Awakened Powers". This boosts his default Shooting Star to grant MAX BRV Up I for 5 turns.

Noctis wields the Engine Blade. The player can avatar-change into Noctis.

A magical blade used by a royal family.

The Engine Blade appears as part of a collaboration with Final Fantasy XV. It is a small sword-type weapon that can be found in the Abandoned Factory area. If the weapon is fully upgraded, it alters the player character's dodge to resemble Noctis's phase ability and changes the game's damage display font style to match the one from Final Fantasy XV.

The sword's Weapon Story details the relationship between King Regis and his young son Noctis. As the king of Lucis, Regis is very busy and regrets not being able to spend much time with his son. Noctis feels similarly, but the two struggle to express their feelings to each other. While eating dinner together, Regis asks his son what he desires most in the world. Noctis responds by pointing at the Engine Blade hanging on the wall. The king interprets this as his son wanting to rule Lucis, but in reality all Noctis wanted was his father to tell him a bedtime story.

2B wielding the Engine Blade.

The Engine Blade appears as Noctis's weapon. It is used as a weapon in a similar manner to the swords used by Yoshimitsu. 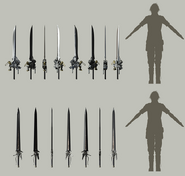 Artwork of Noctis using the Engine Blade for Puzzle & Dragons.