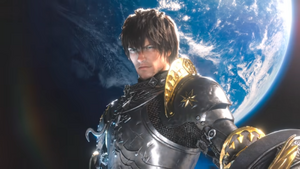 "Endwalker" is the main theme of Final Fantasy XIV: Endwalker. It was first revealed on May 14, 2021 as part of the full opening trailer of Endwalker.[1]

"Endwalker" is the version of the song that focuses on the new melody while "Endwalker - Footfalls" is the version used in the full-length opening trailer. Both versions were first released as part of the Endwalker 7-inch Vinyl Single.

The main theme was revealed with the full trailer of Endwalker. The trailer follows the Warrior of Light walking on the Moon while the Scions of the Seventh Dawn fight against the impending destruction of their world orchestrated by Fandaniel and Meteion. The trailer's narration is Emet-Selch's description of the Final Days of Amaurot, which is paralleled by the conflict between the Scions and Fandaniel.

In-game, the leitmotif of "Endwalker - Footfalls" is used throughout Final Fantasy XIV: Endwalker, including in the dungeon boss theme. "From Below", the leitmotif of "Torn from the Heavens" arranged by Soken plays during Thancred's solo duty in

A Frosty Reception and in Labyrinthos for the duration of its late-game quests. "With Hearts Aligned", a mix of "Endwalker - Footfalls" and "The Maker's Ruin" arranged by Soken plays during the final phase of

The Final Day. "Endwalker - Footfalls" itself with the chorus from "With Heart's Aligned" plays in the final battle against Zenos viator Galvus.

"Endwalker - Footfalls" is the 1st track and "Endwalker" is the 53rd track on Endwalker: Final Fantasy XIV Original Soundtrack.

"Endwalker (Chiptune Version)" is a bonus track available on the original soundtrack.

The lyrics of the verse "On wings of hope" are used as achievements for completing the main scenario quests of Endwalker.

The main theme begins with an initial, moody segment featuring the main vocalist referring to his "heart of ember", and an instrumental section with electric guitar. The song starts to pick up in energy and hope with the introduction of background vocals, some of which are taken from the Dravanian passage of "Heavensward". This passage transitions into the main vocalist singing the chorus of "Storm of Blood". As the main vocalist wails, the lyrics become layered at this point, and the next instrumental section (a leitmotif of "Torn from the Heavens") is more symphonic, featuring string instruments rather than the guitar. After more background vocals praising the ideal of hope, the main vocalist sings the chorus of "Shadowbringers" before arriving at the climax of the song, in which the main vocalist belts out lyrics vowing to "forge ahead" no matter what enemies he faces. The background melody also features a remix of "Torn from the Heavens", so that every expansion of Final Fantasy XIV to date is featured in the main theme. According to Masayoshi Soken, the main theme uses chords that most guitar players do not use.[2]

The Primals published a music video for their release of the 7-inch vinyl single of "Endwalker". The music video stars Juri Morine, who plays a woman who starts the video sitting around in her home, which has a moogle statue and goobbue plush. Throughout the video, The Primals perform "Endwalker" in a field, and the protagonist departs from home, walking towards the field and mouthing the lyrics to herself. After she meets a woman on a bridge who is smoking a pipe similar to Yotsuyu goe Brutus's, the protagonist walks through a rocky field reminiscent of the moon, and walks off into the sunset, analogously to the Warrior of Light's exit in the Final Fantasy XIV: Endwalker trailer.

The official lyrics of "Endwalker - Footfalls" were released on the Developers' Blog.[3][4]

Storm of blood, born from blood, of our fallen brothers
Thunder stilled, oaths fulfilled, now we yearn for freedom

Our song of hope, she dances on the wind higher, oh higher
E'er our vows endure, and remain forever strong
Standing tall in the dark do we carry on

On wings of hope, you rise up through the night higher, oh higher
Carrying our song, cradled fast within your arms
That its chorus might ring for all

One brings shadow, one brings light
Two-toned echoes tumbling through time
Tumbling down to the never

Fearless hearts ablaze
(When the world comes crumbling down)
No more time to waste
(Know I'll be there)
No, it's not too late
(Though our fleeting moment has gone)
To forge ahead
(You're not--you're not alone YEAH)

As we ride again
(As you turn your eyes to the stars)
To another end
(Oh, I'll be there)
Where it all begins
(With my chorus guiding you)
Forge ahead
(Forge ahead)

A fragment of the main theme was released with the teaser trailer[7]. The lyrics of this version were muted and muffled, and only three minutes of the six-minute long theme were released at the time.

The main theme received praise from music critics who do not typically review video game music. Rock magazine Loudwire wrote that the main theme was "epic" and describe Carter's performance as a "full-belting vocal giving listeners a broad view of his range".[8], while Rock Sound said that the trailer looked "absolutely stunning" and praised the builds, emotions, and "spiraling melodies" of the main theme.[9]