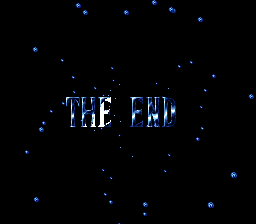 The "Ending Theme" (エンドタイトル, Endo Taitoru?), also known as "The New Origin" is one of the background themes for the ending of Final Fantasy V, along with "Dear Friends". The long theme contains themes of Final Fantasy V, including "Spreading Grand Wings" and the game's main theme.

The "Ending Theme" plays after the ending sequence, during the staff roll.

"Ending Theme" is included in a medley of ending themes from the main series, arranged for the ending theme, "DISSIDIA -ending- from DISSIDIA FINAL FANTASY". The segment used in the medley is the initial part of the theme, until the end of the "Spreading Grand Wings" segment.

The "Ending Theme" returns for the medley arranged for the ending theme, "DISSIDIA 012[duodecim]-ending- from DISSIDIA 012[duodecim] FINAL FANTASY". The segment has a slower pace than the respective segment from "DISSIDIA -ending- from DISSIDIA FINAL FANTASY", and features the motif "Main Theme of Final Fantasy V" at its start.

The "Ending Theme" of Final Fantasy V plays at the conclusion of its Series play segment.

A remix of "The New Origin" by Kenji Ito, known as "Mysidia's Sky Garden", is used for the race theme of the Mysidia's Floating Gardens course. It is also the 22nd track in the original soundtrack.

A piano arrangement of "The New Origin" by Shirou Satou was featured in the album.