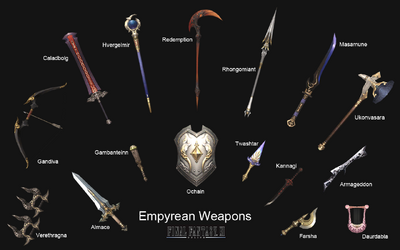 Empyrean Weapons (エンピリアンウェポン, Enpirian Wepon?) are sixteen weapons in Final Fantasy XI obtainable through a series of weapon trials as part of the Trial of the Magians. It is prophesied that the weapons, which are embed with moogle magic, will slumber until such time as adventurers will wield them to avert calamity from befalling the world.

Empyrean Weapons are the third set of legendary arms to be introduced and require purchase of the various Abyssea battle add-ons to obtain and further upgrade. Similar to Relic Weapons and Aeonic Weapons, Empyrean Weapons are divided by the fourteen weapon types that have Weapon Skills (which means all weapon types other than Throwing) and also include an additional shield and instrument.

Although the initial level of a "completed" Empyrean Weapon is 80, it does not gain its unique weapon skill and aftermath effects until it is upgraded to its level 85 version. As of 2012, each weapon can be upgraded to its elevated Level 99 form, granting the Afterglow ability. The afterglow of all Empyrean Weapons is a brilliant scarlet.

[view · edit · purge]Empyrean, from the Medieval Latin empyreus, properly Empyrean Heaven, is the place in the highest heaven, which in ancient cosmologies was supposed to be occupied by the element of fire (or aether in Aristotle's natural philosophy). The Empyrean was used as a name for the firmament, and in Christian literature, notably the Divine Comedy, for the dwelling-place of God, the blessed, celestial beings so divine they are made of pure light, and the source of light and creation. The word is used both as a noun and as an adjective, but empyreal is an alternate adjective form as well. Having the same Greek origin are the scientific words empyreuma and empyreumatic, applied to the characteristic smell of the burning or charring of vegetable or animal matter.