In the Zodiac versions, it now provides 60 Attack, 6 Evade, +2 Magick Power, and 33 CT and requires the Rods 3 for 40 LP. It can now be bought for 6,000 gil at Phon Coast and Archades, stolen from Apsara (3% chance), and found at Phon Coast (Pora-Pora Sands), Tchita Uplands (Realm of the Elder Dream) and Trial Mode Stage 70 (with Diamond Armlet).

The Empyrean Rod is a

Black Mages. It can be obtained in the Ruby Sea by trading in 10 Empyrean Aetherpool Grips, themselves acquired by sacrificing 10 empyrean aetherpool levels in Heaven-on-High. 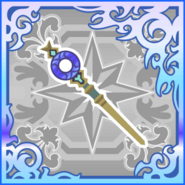 [view · edit · purge]Empyrean, from the Medieval Latin empyreus, properly Empyrean Heaven, is the place in the highest heaven, which in ancient cosmologies was supposed to be occupied by the element of fire (or aether in Aristotle's natural philosophy). The Empyrean was used as a name for the firmament, and in Christian literature, notably the Divine Comedy, for the dwelling-place of God, the blessed, celestial beings so divine they are made of pure light, and the source of light and creation. The word is used both as a noun and as an adjective, but empyreal is an alternate adjective form as well. Having the same Greek origin are the scientific words empyreuma and empyreumatic, applied to the characteristic smell of the burning or charring of vegetable or animal matter.