The Emperor's default player name is Nameless Despot. His manikin counterpart, which is now yellow, has been renamed Simulacrum of a Tyrant.

The Emperor's first alternate costume, "Violet Robe", is an updated version of his second alternate costume from Dissidia 012. His hair is slightly shorter and the metal head ornament is more visible, featuring additional spikes. His boots are now heeled. Its first alternate coloration recolors his robe white with striped pants, his shoulder attachment brown, and his cape a gradient of purple and rose. The second recolors his robe dark rose with white pants, his shoulder attachment black, and his cape a gradient of brown to yellow.

The Emperor's second alternate costume, "Hell's Remnant", is an updated version of his EX Mode appearance in his default costume from Dissidia and Dissidia 012. 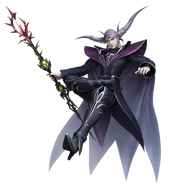 Hell's Remnant III.
Add a photo to this gallery

While still arrogant and a megalomaniac (such as openly gloating that none of the Eidolons are too powerful for him to command), the Emperor's overall disposition has softened compared to previous Dissidia games, being irritated at the presence of the planesgorgers and also angered at Kuja's betrayal. Unlike in the old cycles, the Emperor shows no desire to betray Spiritus for his own schemes. He agrees to a truce with the warriors of Materia to stop Shinryu.

The Emperor wields rods as his main weapon. His alternate weapons, bar the Rod of Censure, have not appeared in any Final Fantasy game prior, and are newly designed for him in the Dissidia series.

His default weapon, Demon's Rod, is featured in a Yoshitaka Amano's art of the Emperor. This first alternate weapon, the Venom Rod, is a spiked rod resembling a rose with demonic thorns. The second alternate weapon, Rod of Spite, is a black rod with demonic and hellish motifs, including red wings and a purple spiked skull. This rod alludes to the Emperor's Dark form, and refers to his desires for destruction after returning to the death and how almost slaughters the party of heroes that finished him off as a mortal. The third alternate weapon, Rod of Censure, is unlike the other weapons. The rod is lighter in coloration and design, and is angelic in motif, featuring an orbed center, a golden crown at the tip, and white wings underneath. This rod alludes to the Emperor's Light form, and refers to passing judgment onto those considered impure or wicked. The fourth alternate weapon is the Karmic Rod, and is depicted as having jagged spikes as well as largely purple with a green crystal on top. The name alludes to the spiritual concept of cause and effect, namely that one's actions determines their future. 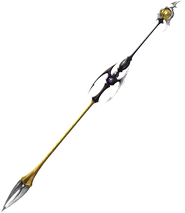 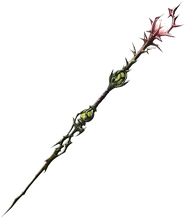 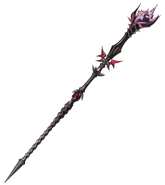 The Emperor's Rod of Spite 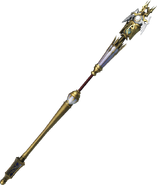 The Emperor's Rod of Censure. 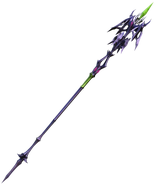 The Emperor's Karmic Rod.
Add a photo to this gallery

Spiritus summons the Emperor back to World B to serve as one of his champions and fight against Materia's chosen warriors. While the Emperor is disinterested, he sets out to gain the support of the Eidolons.

He crosses paths with Terra and Zidane in Midgar. He asks which of the Eidolons they are looking for, and taunts them for not knowing them by name. He is joined by Sephiroth, and together they launch an attack against them, the Emperor going after Zidane. The Emperor gains the upper hand and ensnares Zidane in one of his traps. As the Emperor tortures Zidane, he is ambushed by Kuja, and calls him out for being a traitor. The Emperor and Sephiroth face off against Terra, Zidane, and Kuja, seeking the support of a nearby manikin. After their battle, the Emperor and Sephiroth observe as the planesgorgers descend upon the arena, and speculate that their efforts have awakened the wrong force, before fleeing.

Later, the Emperor participates in the final clash to awaken Shinryu, the dragon god threatening the world with planesgorgers. He assists Exdeath in his struggle against the Onion Knight and Zidane before being sidetracked by Firion. With Shinryu descending upon them, the Emperor aids in defeating him for good. With the threat eliminated, the Emperor departs with the other warriors after bestowing his essence to Spiritus in the form of a crystal.

Type: Marksman - The Emperor can toy with his foes using magic that draws in surrounding enemies, in conjunction with an array of traps and homing spells. Some of his HP attacks can surprise foes by appearing suddenly at their position, and others remain on the stage for a long time.
EX Skill: Starfall - Rains meteorites on the Emperor's target, freezing them in place on the last hit. 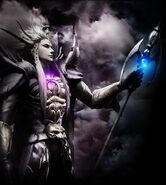 Emperor in the arcade version. 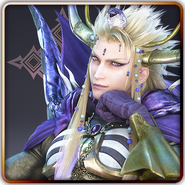